Murray Richards, 44, of Bokarina, is now running the design side of his wife’s business Go For Zero, which specialises in toxin-free, sustainable products from Australian brands.

Mr Richards, who played 28 matches with the Kookaburras men’s team from 1998 to 2000, excelled in his USC studies, majoring in graphic design and user experience/user interface design.

He earned a University Medal for his grade point average of 6.96 out of a perfect 7 when he received his degree at the USC Sunshine Coast graduation ceremony earlier this month.

“I enjoyed learning the theory behind design, and developing my understanding across a range of disciplines,” said Mr Richards, who was determined to finish a degree after his university studies in the 1990s were interrupted when he moved from Brisbane to Perth for sport.

“The USC graduation was a special moment, as I was able to share it with my children, my wife and my mother.”

Mr Richards had moved to Belgium in 2000 to pursue a professional contract to play hockey.

When his playing career ended, he moved into coaching and sports management, including as High Performance Manager of the Belgian Hockey Federation from 2013 to 2016.

“Following the birth of our children, my wife Ellie and I moved back to Australia for a change of lifestyle, and the opportunity to study allowed me to transition out of sport into a new career,” he said.

He studied while also working as a national junior selector for the Hockeyroos.

The couple now works with a team of four at Go For Zero after hiring another USC graduate, Georgia Gwyn (Business Marketing, 2019).

Mr Richards said the skills and knowledge from his Bachelor of Design had expanded his role at the business since it started in 2018.

“I work across a range of projects in graphic, product and web design. My degree provided the underlying principles of design that I needed to boost my skills in the workplace.”

“Our aim is to create positive change through our online store goforzero.com.au and our retail stores in Caloundra, Maleny and Paddington.”

He also works as a freelance designer for DuoCreate on the Sunshine Coast, and co-owns podiatry startup Pro-Fit Orthotics.

He said he was looking forward to congratulating his sister Jules Mead on her upcoming USC graduation. She is currently completing a doctorate in Creative Writing. 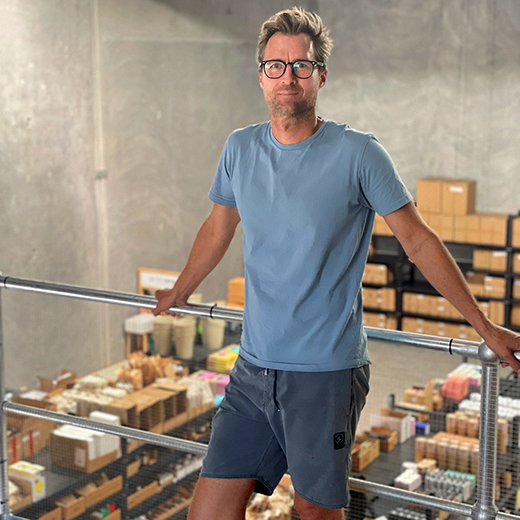