Mr Brannigan, of Golden Beach, said he took the advice of the celebrant to enrol in a USC Creative Industries degree, further honed his writing skills, and recently won the inaugural Kuracca Prize for Australian Literature.

“My short stories competed against a wide range of genres and styles, so winning this prize is all sorts of lovely,” he said.

“It's an acknowledgement that my craft is at least noteworthy. I feel like a 'writer' now.”

The $5,000 prize, open to all Australian writers, was set up by Overland literary journal with Create Victoria funding for the struggling arts community last year. Fourteen stories were longlisted from 500 entries.

Mr Brannigan, 49, won for his short story Great Grandmother Arrabrilya and was longlisted for another story, Lest We Forget.

He recalled he was pleasantly surprised by the reaction of celebrant Dr Lynette Maguire, a USC tutor and Doctor of Creative Arts graduate, after she read his vows at his “wildly bohemian” wedding to Helen Klaas at Kawana Forest in 2017.

“Lynette thought I had a flair for writing and suggested I enrol at USC,” he said.

“I had been writing for some time in a very solitary way and thought her suggestion might improve my almost-secret hobby – and it has.

“It helps that USC’s teaching staff and their instruction and guidance are exceptional.”

The USC Bachelor of Creative Industries (Creative Writing and Publishing) student, who has worked in university libraries, as a disability support worker, and currently as a registered nurse in a palliative care setting, is pursuing goals in both publishing and academia.

Great Grandmother Arrabrilya, written as “pre-invasion pastoral whimsy” will be published in the winter 2021 edition of Overland.

“The story attempts to imagine how a man might have engaged with the landscape as he moved about in it hunting, thinking, dreaming, observing and communing with the natural world around him; a world awake, alive, sentient and deeply interconnected,” Mr Brannigan  said. “It is an imaginative reconstruction of a time long ago disrupted.

“Lest We Forget is a monologue of a white farmer/settler keeping watch in the night for a murderer, a mongrel, bent on revenge; who is a survivor of a frontier massacre and who may or may not be the speaker's son. The title is a challenge to celebrations of cultural memory and nationhood.”

“Adam is also the fourth student from this program in the past two years to win national and international awards for their short stories,” Dr Williams said. 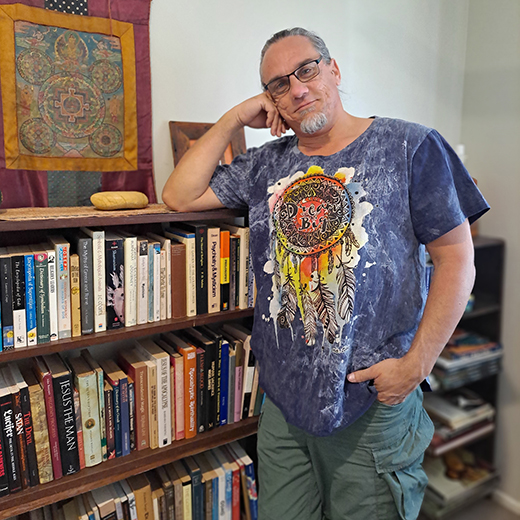 Business people in the Moreton Bay, Sunshine Coast and Fraser Coast regions will have the chance to boost their operations and aspirations through five Business short courses being offered by USC.