One of the largest reef-dwelling fish in the world and a highly-prized Asian seafood, the giant grouper (Epinephelus lanceolatus) was presumed to follow the reproductive pattern of most groupers, starting as females then turning into males when much older and larger.

Now international research led by USC’s GeneCology Research Centre has discovered that the giant grouper is a diandric protogynous hermaphrodite, which means that some individuals become males without going first through the female phase.

Research Centre Director Professor Abigail Elizur said the finding was surprising and had significant implications for developing a sustainable giant grouper aquaculture industry in Australia, The Philippines and Vietnam, and relieving pressure on remaining wild populations.

“In the wild, males and females take many years to reach sexual maturity, so captive breeding is essential to meet growing demand for the giant grouper. However, this has been limited by a gap in knowledge about its reproductive biology,” she said.

Known in Australia as the Queensland groper, the species is found throughout the Indo-Pacific region, living up to 50 years and growing as large as 2.3m and weighing up to 400kg.

“Previously it was thought that all males did not reach sexual maturity until they grew to around 100kg, with their size making them impractical to hold in great numbers in fish farms and difficult to handle for breeding purposes,” Professor Elizur said.

“These findings of diandric protogynous hermaphroditism mean that we can increase reproductive success by manipulating the fish towards producing much smaller males that are much easier to handle” she said.

The study was part of a project on developing technologies for giant grouper aquaculture, funded by the Australian Centre for International Agricultural Research (ACIAR).

It investigated the reproductive development of hatchery-bred juveniles from a commercial breeding facility in Cairns, Australia, and the sexual maturity in stocks of wild-caught giant groupers held in sea cages in The Philippines and Vietnam.

The study recently received one of The Philippines most prestigious research honours when it was awarded the 2020 Outstanding Published Paper in Aquatic Sciences by The Philippine Council for Agriculture, Aquatic and Natural Resources Research and Development.

Grappling giant groupers to study their reproductive biology was not an easy task for the researchers, so as part of the study, they also developed a non-invasive method to detect ovulation in females.

“Sexual maturity is generally confirmed through biopsy while other techniques are used to measure the plasma levels of specific protein markers,” Professor Elizur said.

“These methods are invasive, require technical skills and are difficult to perform in large-sized fish such as giant grouper.” 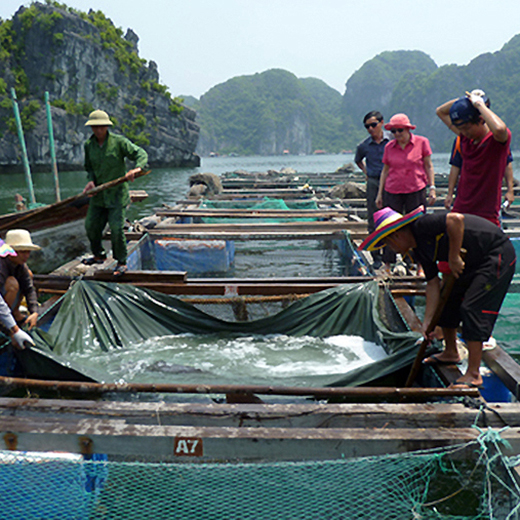