A USC graduate has taken out a hotly contested category at Queensland’s premier journalism awards with a story about the state’s youngest drag queen.

ABC news reporter Rachel McGhee, who graduated from USC with a Bachelor of Communication in 2016, won the Regional and Community - Broadcast Report category at the recent 2021 Queensland Clarion Awards.

The judges said her original story, Golden Age of Drag, had a profound impact, giving a voice to then 13-year-old Ipswich teenager Logan Kelly and challenging the stereotype of drag queens in a regional community.

The judges said Ms McGhee’s ability to convince the talent to share their sensitive story, and the respectful way in which it she told it, had set her story apart from other entries.

Ms McGhee, who attended St Teresa's Catholic College at Noosaville, said she was thrilled with the win and the public reaction to the story.

“I knew it would get a bit of kickback from the more conservative people in the community, but it also received a lot of positive feedback,” she said. “On social media, people were just so excited for Logan and what he’s doing.”

Ms McGhee said when writing the story, she focused on being sensitive to Logan and the topic in general.

“Logan is amazing. I could have run the whole story as his interview because he spoke so candidly about what he’s going through.”

She said USC’s Journalism program coordinator and lecturer Dr Jane Stephens had been a great mentor during her studies at USC.

“I think it was the ethics and journalism class run by Dr Stephens that really stuck with me and where I figured out what journalism was about and how to go about it the right way,” she said.

Dr Stephens said Ms McGhee had produced an outstanding story to receive a Clarion award, which attracted an extraordinarily high standard of entries.

She said Ms McGhee had been “a dynamo” as a student. 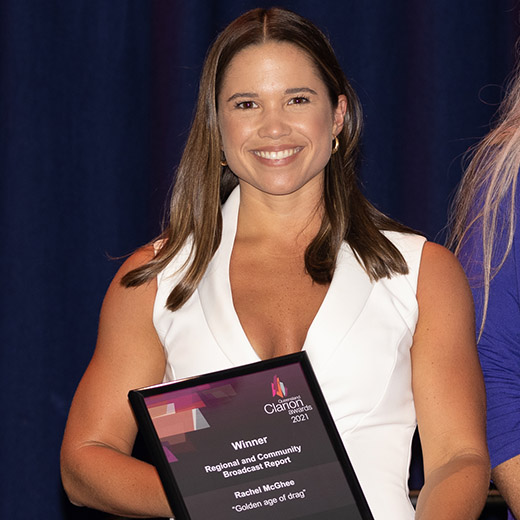