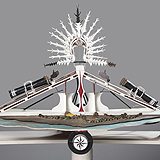 Co-curated with Mieke DeDeyne, this unusual exhibition of sculpture and ilma highlights the work of two of Australia’s senior coastal Indigenous male artists.

Originally from Erub (Darnley Island) in the Torres Strait and now living in Cairns, artist Ken Thaiday produces sculptural works or “devices” that are based on traditional head-gear used to perform his people’s shark dreaming stores.

Thaiday’s shark dance headdresses are made of plywood, wire, string, bamboo, feathers and more to create moveable and ornate headdresses and devices. 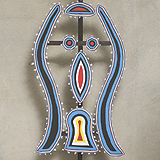 Ilma stories are composed and owned by individuals and the men are said to have “received” the songs from the spirits of the ancestors.

Roy Wiggan’s work is made of painted boards and string.