Häxan (Witchcraft Through the Ages) - University of the Sunshine Coast, Queensland, Australia

Häxan (Witchcraft Through the Ages) 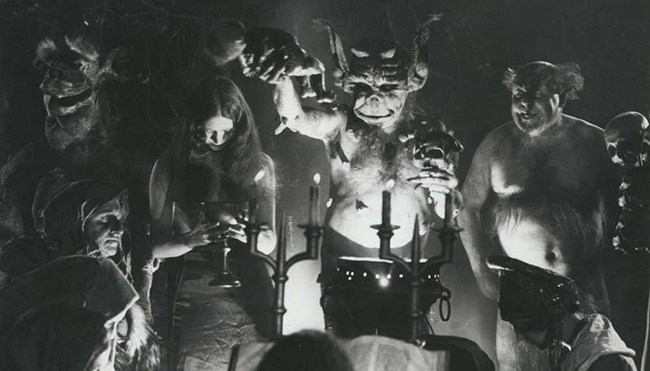 Häxan (Withcraft Through the Ages)

Grave robbing, torture, possessed nuns, and a satanic Sabbath, Benjamin Christensen’s legendary film uses its ostensibly serious exploration of the witches of the Middle Ages to produce a brew of the scary, gross, sensuous and darkly humorous.

Presented in partnership with the Queensland Film Festival join us for this free screening accompanied by a spine tingling and experimental live soundtrack by Lucy Cliché and Naomi Blacklock.

This event is a must for anyone with and interest in the occult.

Lucy Cliché has been a critical force in the Sydney DIY music and sound scene for over 10 years. Under her pseudonym Lucy Cliché, she explores the intersections of techno, industrial and electro through an all hardware set-up.

Naomi Blacklock is a Brisbane-based artist who works through sound installation, text works and performance to explore mythologies regarding the witch archetype and harmful histories of gender and cultural identity. Her ritualised sound objects and performances are intended to amplify the body and the voice through performative bodily precision and aural screaming.