Studying animals that share our city spaces can reveal much about how animals adapt to novel ecological conditions, and human activity. Animals that live in urban areas also present opportunities for scientists to test theories about social, morphological and genetic evolution through empirical research.

For the past five years, USC Research Fellow Dr Frere and her research team have been monitoring more than 650 city-dwelling Eastern Water Dragons across four sites in Brisbane’s central business district. Each dragon monitored is given a name and is individually recognisable to researchers from the unique scale patterns on its face. This is the largest urban wildlife monitoring project of its kind in Australia.

Eastern Water Dragons are an iconic, native and protected species with long lifespans and complex social and life-history traits. They reside in parks, green spaces and waterways, in both urban and non-urban environments on the east coast of Australia.

To date, Dr Frere’s team has made a number of breakthrough discoveries, adding to species knowledge as well as answering broader evolutionary questions.

“I know many people love dragons as much as we do. They share our backyards and recreational spaces and unlike many other native species, they are thriving in the city. This means they can give us valuable insights into how animals can adapt to human activity”. Dr Celine Frere

Help us continue this exciting research

Your donation will contribute to fieldwork, laboratory and research costs including: 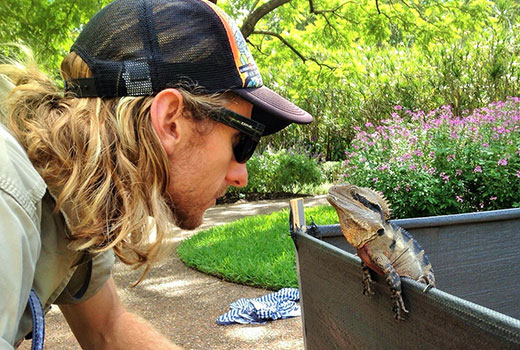 100% of your donation will go towards the dragon research project, and any donations over $2 are tax deductible.