Myths about studying later in life - University of the Sunshine Coast, Queensland, Australia

Myths about studying later in life

If you’ve been helping your child research universities and degrees, you may have come across a program you’re interested in. You’re not alone – many USC students are parents who are inspired to study later in life.

But if you haven’t studied since high school (or it’s been a couple of decades between degrees), it’s natural to have some questions around what to expect. Here are three common myths about returning to study – and why you shouldn’t let them stop you.

You’ll be the oldest person there

At USC, more than half our students are ‘non-school leavers’. This term applies to anyone who is not coming to university straight from high school – which includes people who’ve taken a gap year (or three), professionals looking for a career change, parents balancing study with raising their families, retirees who are broadening their horizons, and more.

This means you’ll study alongside a diverse group of students with a wide range of backgrounds and perspectives. As well as widening your social circle, these rich discussions will ultimately help build your interpersonal and communication skills. If you make an effort to engage with all your fellow students, you’ll be amazed how much you can learn from each other.

You won't be able to cope with the workload

Parents are some of the most organised people on the planet. While you might worry about adjusting to study and finding the time to complete assignments, in reality you already have some of the most important skills you’ll need: personal organisation, self-motivation and the ability to manage your time effectively.

Sure, you may have more responsibilities and commitments than the average school leaver, but you’re also more experienced at juggling competing priorities. If you are diligent in planning your study time, ask questions when you need to, and take advantage of USC’s academic skills resources, you’ll be well on your way to success.

Perhaps you’ve always dreamed of being a teacher, nurse or engineer. Maybe you’re ready for a career change. Or maybe you just want to prove that you have what it takes to study at university – but have been nervous about making the leap.

No matter what your goal is, it’s not too late to achieve it. The USC graduating class of 2017 includes hundreds of students who’ve made the decision to study later in life and are seeing their hard work pay off.

Watch Lizzy England's story, a recent USC graduate who decided to study later in life, alongside her 26 year old son. 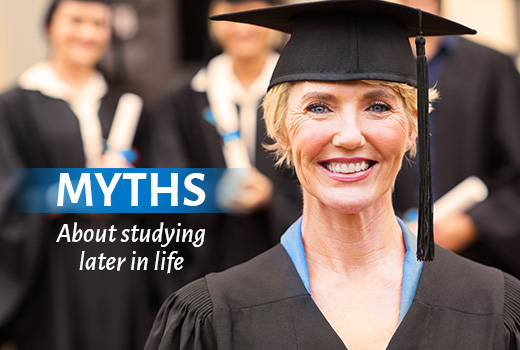