Choosing a degree is a big decision for any young person. But what about choosing two degrees?

In a rapidly changing economy, young people will need broad skillsets and the ability to adapt to different work environments. As a result, many students are opting to broaden their horizons by studying a double degree.

A double degree lets your child combine knowledge and skills from two different fields. They can study related fields (like psychology and counselling), or combine a professional qualification with an area they are interested in (like business and science, or law and environmental management).

Or, they can use their second degree to study something they love, like creative writing.

A double degree usually involves the same workload and number of courses per semester as a single degree. With just one extra year of study, your child will graduate with two qualifications and more flexibility in their chosen career.

As a result, a double degree can be a good choice if your child has broad interest areas, or is struggling to settle on one degree.

That was the case for USC student Beth McKenna, whose interest in social justice inspired her to enrol in a double degree in law and social science.

“I didn’t know exactly what I wanted to do, so I thought it would be good to have a lot of options,” Beth said.

“I was mostly interested in the social science side of things, but I thought law would be a good balance for that, especially if I ended up working in government.”

Now in her third year of study, Beth said her law subjects had helped her identify a wider range of career opportunities.

“I’ve become very interested in a career in law, but particularly in law reform, and helping to improve the legal system, which is the focus of my social science degree,” she said.

“Choosing a double degree has given me much broader knowledge about the type of work I’d like to do.”

Other students choose in a double degree with a specific career in mind. Raymart Walker enrolled in USC’s Bachelor of Education (Secondary) / Bachelor of Science because he wanted to be a high school physics and maths teacher.

While his career goals have since evolved beyond the classroom, he said studying two disciplines had helped him build a broad skillset that has led to student leadership roles on USC’s Student Representative Council, Student Guild and University Council.

“Through my education degree I’ve developed skills in public speaking and presenting, which have been really useful,” he said.

“Because you’re working with school students, you learn to present information in interesting and concise ways, and to keep your audience engaged. Those are skills that apply in a range of jobs and professions.

“At the same time, I’ve had opportunities to assist in research at the Australian Synchotron and present at research conferences, so my science degree has helped activate different career paths too.”

Beth and Raymart both said the highlight of their degrees was the variety of content, learning methods and assessment.

“I was initially a bit worried that studying two degrees meant I’d be at uni longer, but as soon as I realised that it would be shorter than completing the degrees separately, I went for it,” Beth said.

“A lot of people assume it’s a heavier workload, but I actually find it easier than doing a single degree, because the variety makes the study more interesting.” 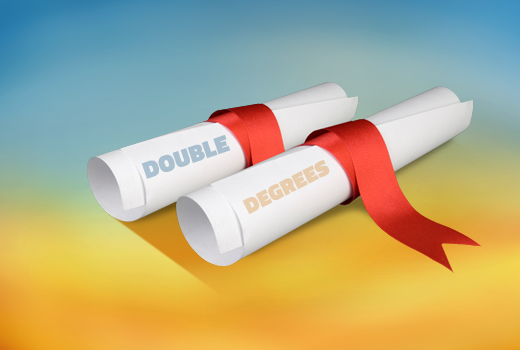