Setting an example for my child - University of the Sunshine Coast, Queensland, Australia

Setting an example for my child

Vanessa Watson loves her job as a nurse, especially having a positive impact on other people’s lives. It’s been quite a journey for Vanessa to enter her chosen career, one that started seven years ago with USC’s Tertiary Preparation Pathway program. Vanessa’s key driver? Her then nine-year-old son, Ben.

Going back to study was initially daunting and required a juggling act; however, Vanessa persevered with her goal. After finishing the Tertiary Preparation Pathway program, Vanessa went on to complete a Bachelor of Nursing Science at USC. Vanessa recently shared her story with USC’s Parent Lounge in the hope to inspire other parents to consider their own education goals, as well as their child’s.

“My parents were very proud of me when I enrolled in the USC’S Tertiary Preparation Program. Up until that point, I’d been a stay-at-home mum who only completed Year 10.

I remember taking my dad for a tour around the campus he was so excited that one of his children was able to go to uni as he felt university was not as attainable for his generation. That really upset me. I didn't want my son to think like that too.”

Vanessa’s son, Ben, is now in Year 12 at school and has already begun his own university journey. Ben, who has a passion for all things Japanese, is completing first-year Japanese language courses through USC’s Headstart program. 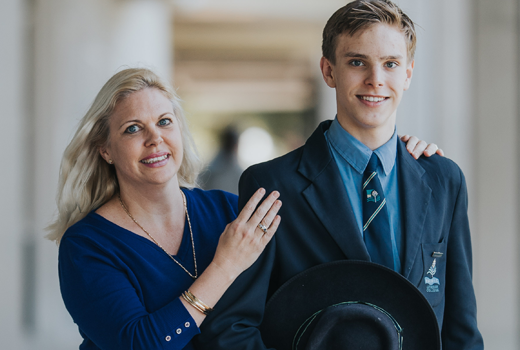