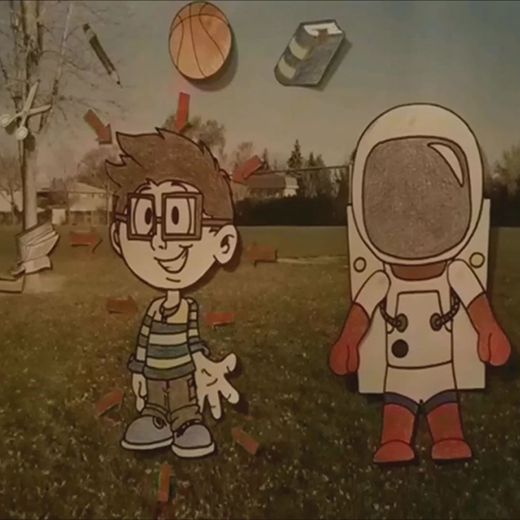 A stop motion animation film created by two USC students that explains why gravity works differently on Earth and the moon has taken out first prize at DigiXFest in Sydney.

DigiXFest, the Digital Explanations Festival, is a national film competition open to anyone studying a science or education degree at an Australian university. It showcases innovative digital explanations of scientific concepts.

Brad Blissett, 39, of Pacific Paradise and Michael Gibson, 24, of Alexandra Headland are both studying at USC to be primary school teachers.

They teamed up to produce the film Gravity for an assignment set by Lecturer in Education Beverley Lowe who entered the film into the competition.

“I asked my students to produce a slowmation video that demonstrated the correct teaching of a difficult science concept,” she said. “I think Brad and Michael did an amazing job of explaining gravity in an easily understood and engaging way.”

Brad and Michael said students sometimes found it hard to visualise or understand scientific concepts, so animation could be a great teaching tool.

“Stop animation lets the kids see these concepts at work in a way they can relate to and enjoy,” said Brad. “Plus you can create these animations simply by using a phone app and things lying around the house.”

Michael said the technique could help uncover various misconceptions students might have regarding science concepts.

“With a magnitude of topics baffling students, the use of stop motion animation can help to break down the idea and get the message across,” he said.

Their prize-winning animation Gravity can be viewed at http://bit.ly/142iRAN or by searching on youtube.