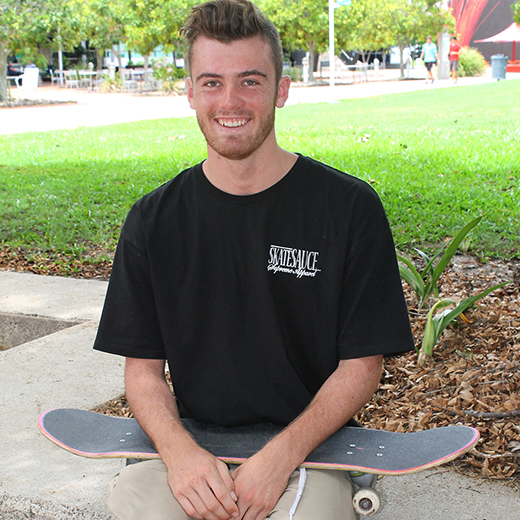 When Chancellor State College OP2 graduate Matt Beighton decided to enrol at USC to pursue a Bachelor of Science in 2015, he knew there would be a number of extracurricular benefits.

“It’s super convenient,” said Matt, who took a gap year after finishing Year 12 in 2013 and lives at Buderim.

“My elder brother Nick is studying primary teaching there, his girlfriend is studying high school teaching there, my friends from school next door are there – and it allows me to continue my surfing and skateboarding lifestyle while I’m going to uni.”

What Matt didn’t expect was to be the first recipient in an expanded scheme that guarantees scholarships for all OP1 and OP2 students who start their first undergraduate degree at USC.

The 18-year-old will automatically receive a Vice-Chancellor’s Merit Scholarship, valued at $1,500 per semester up to $12,000 for a three-year program.

“Mum was over the moon and it means I might work just one day a week in my part-time job next year, to focus on my studies,” Matt said.

Applications will open in August 2015 for the next intake. Students remain eligible to be considered for higher value scholarships.

Matt said he wanted to develop a career in neuroscience, mathematics or “anything logical”.

“I’m passionate about maths and physics,” he said. “I like the challenge of solving something hard. At school I did Maths B, C and Physics in a row on Fridays which meant I could directly apply the theoretical stuff into my experiments.”

In the meantime, there’s a family surfing trip to Indonesia over summer.

USC will host a full-day Options Q&A event on Friday 19 December in response to demand from prospective students.

Anyone interested in studying at the University in 2015 is encouraged to drop in to the Sippy Downs campus between 9am and 5pm for personalised advice, campus tours and seminars on “surviving the first year of uni”.