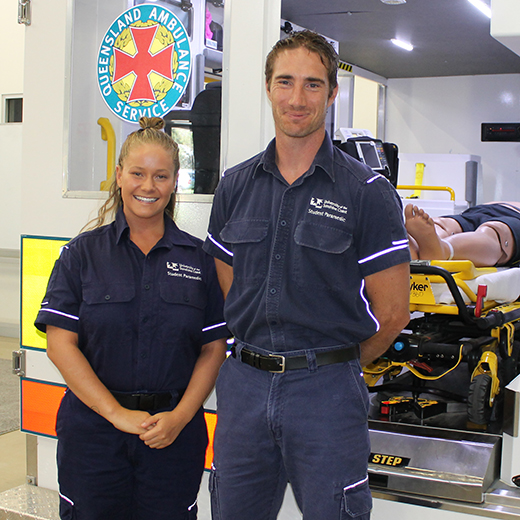 Before enrolling at USC, Cameron spent five years in the army where he did two tours of East Timor, then spent several years working in construction.

“I decided it was time for a change and I really wanted a career with job satisfaction,” he said. “Ever since I was in the army I’ve always liked the idea of doing something positive that really helps people.”

“I guess I’m quite a calm person, which is probably good for paramedics. My favourite part is dealing with trauma patients – that’s where you’re definitely going to help someone and really make a difference.”

Cameron has just completed his third and final year of a Bachelor of Paramedic Science at USC and is in the process of applying for a job with the Queensland Ambulance Service.

Matilda attended Sunshine Beach State High and has been a keen lifesaver with the Marcoola Surf Life Saving Club for seven years where she is now club vice-captain.

“I knew in high school that I wanted to be a paramedic,” she said. “It felt like a really natural progression from lifesaving and a way to challenge myself and further my skills.”

Matilda and Cameron received their prizes at a Queensland Ambulance Service Clinical Symposium and Awards Presentation at Brisbane City Hall.

A team of USC Paramedic Science students has impressed the judges at an emergency simulation competition involving universities from across Australia and New Zealand.