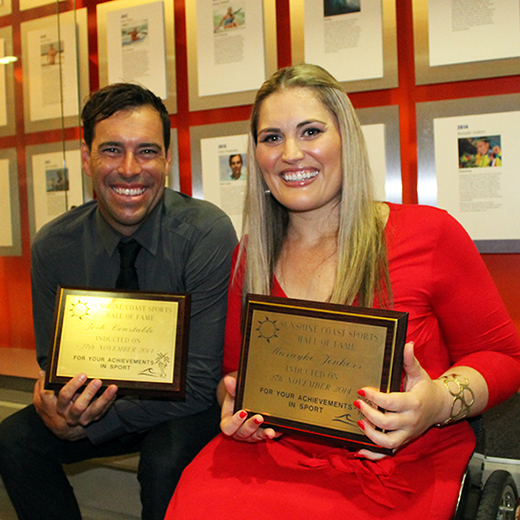 Marayke Jonkers of Maroochydore and Josh Constable of Noosa are now featured alongside the region’s most illustrious sporting talent in the Hall of Fame, housed at USC’s Sports Stadium.

More than 100 people attended an induction ceremony on Thursday 27 November that featured video presentations on the achievements of these two outstanding athletes.

Marayke Jonkers, who became a paraplegic in a car accident as an infant, represented Australia at the Paralympic Games in Sydney in 2000, Athens in 2004 and Beijing in 2008, claiming a silver and two bronze medals along the way.

During a 12-year international swimming career, she broke more than 70 Australian records, won many international medals and was chosen as the Australian flag bearer at the 2010 World Swimming Championships.

Josh Constable honed his skills riding waves at the points off Noosa Heads and then emerged as one of Australia’s best ever longboard surfers, claiming a total of six Australian longboard titles.

He competed on the professional circuit for 15 years, winning a host of international events, including the men’s world longboard title in Costa Rica in 2006.

A Paralympic swimming champion who established the Sporting Dreams charitable foundation to financially assist young athletes with a disability will soon become an Honorary Senior Fellow of USC.