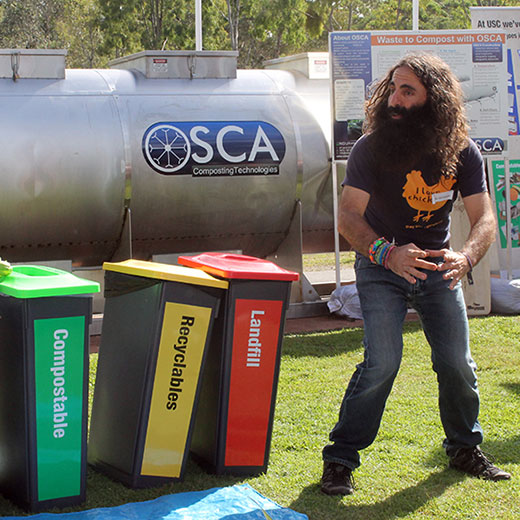 USC has received national recognition for its innovative waste management system, which has led to a 75 percent reduction in throwaway waste.

USC’s “recycling from the desktop” program received the Carbon Reduction award at the 2014 Green Gown Awards held in Hobart on Friday 7 November.

These annual awards recognise excellence in sustainability within the tertiary education sector and this year attracted more than 200 applicants in eight categories from across Australia and New Zealand.

The USC program, which was launched in mid-2013, included the introduction of smaller desk bins for staff and communal recycling stations.

It also involved the installation of a large, on-site composter, which can process up to a tonne of biodegradable waste each week.

USC Vice-Chancellor Professor Greg Hill said the award was a triumph for the program and testament to its ongoing success.

“This award reflects the scale of the success which USC has experienced as a result of our new waste management system both from a financial and environmental perspective,” he said.

“It has been highly effective in reducing the total amount of waste sent to landfill and the amount of time spent on waste removal. It has also contributed to vastly improving our overall recycling efforts.”

USC Vice-Chancellor Professor Greg Hill said a contributing factor to the success of the waste management program was how easy it was for staff to participate.

“With just a few simple steps our employees have played a direct role in helping to reduce USC’s contribution to landfill by 75 percent,” he said.

“I would like to personally thank all our staff for their participation in this program as they have contributed to its phenomenal success, which in turn is preparing the university for a sustainable future.”