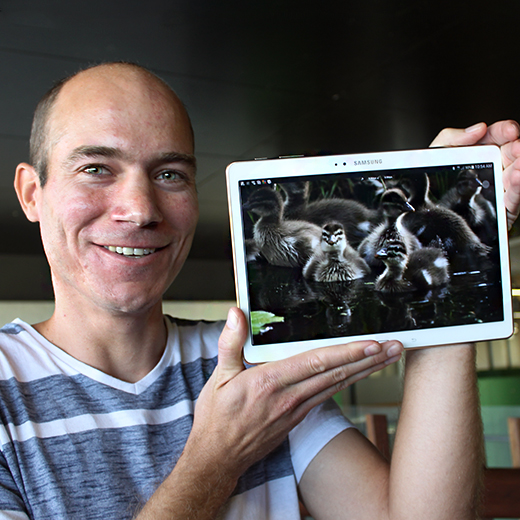 Being in the right place at the right time is what USC student Josh Millican claims is the secret to him winning the University’s inaugural wildlife photography contest today.

Josh’s entry – simply named ‘Ducks, The Ponds’ – so impressed the judges in the first ‘Life’s Wild at USC Photo Competition’ that he was awarded the top prize of a complete camera kit and professional lighting equipment provided by Ted’s Cameras Maroochydore.

The photograph shows a brood of ducklings setting off with trepidation across a pond near the University’s Facilities Management buildings. Josh snapped it using a Canon 60D camera with a 55-250mm Image Stabilisation II lens with an f-stop setting of 4-5.6.

“For this photo, it was definitely all about being in the right place at the right time,” said Josh, of Rangeville, who is doing a combined degree in Arts and Science, majoring in Japanese and Biology and with a minor in Photography.

Josh is keen to use the camera equipment later this year when he spends a semester of his degree in Kyoto, Japan, as part of the University’s award-winning Study Overseas program.

The community section of the photo contest was won by Mooloolah carpenter Phil Bender, who snapped his image ‘Honeyeater bath time’ while waiting for his wife to finish a roller derby training session at USC Sports Stadium.

“It was just happening right in front of me as I walked past the ponds behind the stadium,” said the self-described obsessive birdlife photographer. “The birds would fly in, dip and fly out. So it was a matter of good timing.”

Phil received a $300 voucher from Richard Johnston of Ted’s Cameras.

Competition organiser and USC Lecturer in Digital Design Dr Debra Livingston congratulated the winners and all 45 entrants who submitted a total of 237 photos for the competition.

“Overall they were really lovely photos and documented the wildlife that we have on campus from little spiders to ants, lots of kangaroos, all sorts of different birds and even some snakes,” she said.

Dr Livingston thanked the Office of the Vice-Chancellor, Ted’s Cameras Maroochydore and USC’s School of Communication and Creative Industries for their sponsorship of the competition.

Lauren has plans to be a model student

Hervey Bay OP2 student and national beauty pageant finalist Lauren Bosley is taking steps to achieve a childhood dream of working in health by enrolling in Nursing Science at USC.