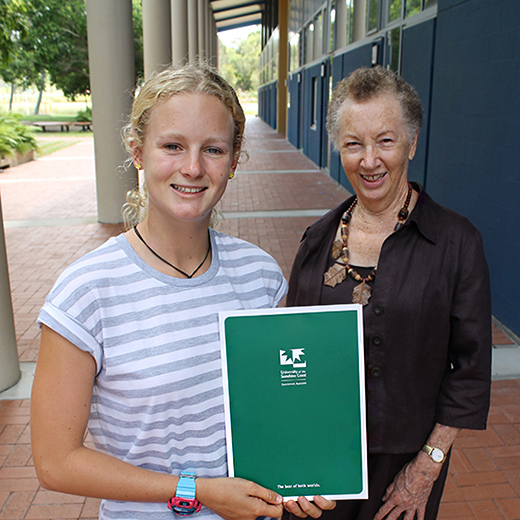 Townsville Grammar School graduate Sally Watson received a welcome financial boost when she began a Bachelor of Paramedic Science at USC this month.

Sally, 18, became the inaugural recipient of the Laurie Cowled Regional Scholarship – valued at up to $20,000 – at USC’s 2015 Scholarship Presentation Ceremony.

The scholarship was established to assist female undergraduate students relocating from rural or regional areas to study engineering or a similar science-related degree at USC.

Sally, who gained an OP5, was a prefect, house captain, swimming team captain and a flautist in the Townsville Grammar School orchestra. She also played water polo and netball for her school and the North Queensland region, was a member of the Kokoda Swim Club and a volunteer lifesaver at the Arcadian Surf Life Saving Club.

The high achiever said the scholarship would cover most of her study costs and would enable her to settle in to living away from home and focus on her studies.

“My interest in the Paramedic Science degree has mainly been from my lifesaving background and working with paramedics closely over the past year in my work as a lifeguard,” she said.

“I had met a few other student paramedics and they also encouraged me to do the degree as they loved it. I’ve heard that it is very hands-on and that people learn quite a lot from it.”

Even though Sally’s revelling in the beautiful surf beaches of the Sunshine Coast and recently signed up as an active member of Alexandra Headland Surf Life Saving Club, she is keen to return to North Queensland for work placements and employment.

“I’m looking at putting my preferences for placements up North, for Townsville or Charters Towers (where I grew up) or Mt Isa,” she said.

Scholarship donor Laurie Cowled of Noosaville congratulated Sally and wished her every success in her studies and future work as a paramedic.

Ms Cowled, who grew up in the small township of Bethungra near Wagga Wagga in NSW, said she understood how difficult it was for country girls to relocate in order to follow their dreams.

“This scholarship is also aimed at helping women who are studying in male-dominated courses,” she said.