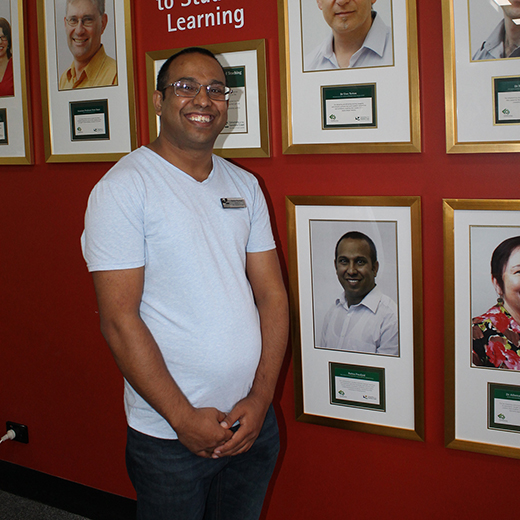 In less than a year after being employed by the University of the Sunshine Coast, USC Fraser Coast Lecturer in Accounting Ratna Paudyal has earned a place on the University’s Wall of Fame.

The cheerful academic, who previously worked for the University of Southern Queensland at Hervey Bay, was honoured in this way last night (Thursday 24 November) for recently receiving an Australian Award for University Teaching valued at $10,000.

In the award citation, Mr Paudyal was acknowledged for his collaborative, student-centred teaching and pastoral care that inspired and motivated his business students to succeed by developing self-belief.

The award, presented by Federal Minister for Education and Training Simon Birmingham in September, also acknowledged Mr Paudyal’s strong focus on meeting the needs and interests of students from underrepresented groups.

The Wall of Fame at USC’s main campus at Sippy Downs now includes 43 large portrait images of USC academics who have received Australian Awards for University Teaching, or their equivalent, over the past 11 years.

Fewer than 110 of these citations were awarded nationally this year.

Mr Paudyal, who was born to illiterate parents in a remote village in Nepal, said he felt privileged to receive the honour and was proud to be part of USC and the Australian university community.

“I did not have any expectations that all of this would happen in my life, but it shows that loyalty and hard work can bring rewards,” he said.

“I would like to thank my colleagues and students who have supported me because working together is what is important and that is my philosophy that I apply to everything I do.”