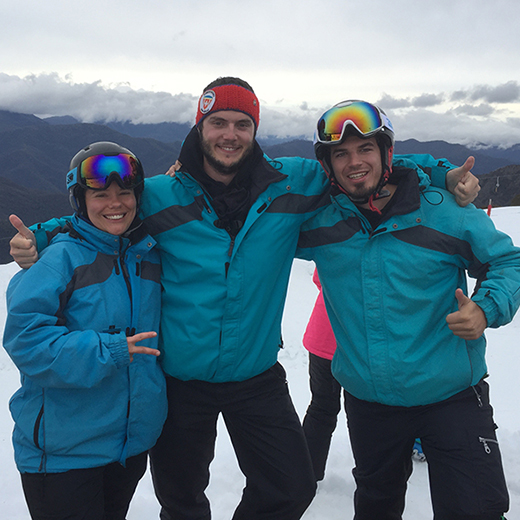 A team of University of the Sunshine Coast students brought some sunshine to the Snow Unigames in Victoria last week, finishing in the top three for one of the tournament’s major awards.

Gian-Luca Reinhard, Ramona Winiger and Thomas Nafzger were the first USC students to compete at the Snow Unigames, and were also the only representatives from the Sunshine State this year.

While missing out on individual medals, the trio received the third-highest number of votes for the Spirit of the Mountain award, presented to the team that showed the best sportsmanship and spirit at Mt Buller, north-east of Melbourne.

The annual program of ski and snowboarding events and social activities attracted hundreds of students from 19 universities across Australia.

Swiss national Gian-Luca, who lives at Alexandra Headland, finished 6th out of 71 competitors in the skier cross, and said he was pleased with how he and his teammates had performed.

“There was a very strong level of competition, and I think we did really well as a small team,” he said. “It was Ramona’s first time racing and she had some great results.

“The atmosphere at Mt Buller was fantastic. Everyone was there to have a good time but still compete at a high level.

“We’re all quite proud to be the first USC students at the Snow Unigames, and especially to be the only Queenslanders at this year’s event.”

USC Sport Manager Nathan Gordon, who travelled to Mt Buller to support the team, said the students had been fantastic ambassadors for the University.

“I was really proud of how they acquitted themselves in their events, as well as their really positive interaction with their fellow athletes,” he said.

“We’re hoping that these students’ involvement in this year’s Snow Unigames will kick off USC representation on an ongoing basis.”

Jessica, 19, was one of only six student athletes selected Australia-wide for the tournament, which runs until Sunday 11 September.