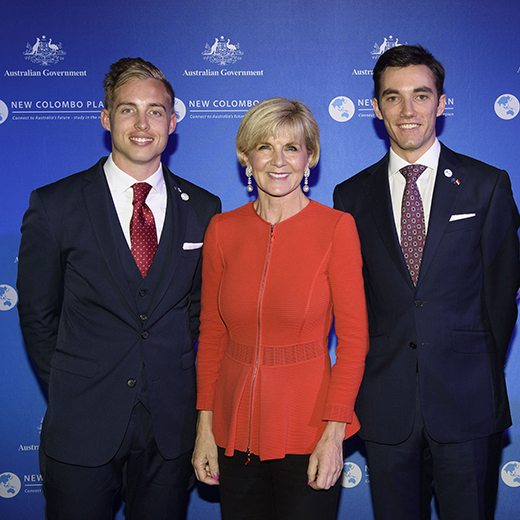 Two outstanding USC students have been recognised among the best in Australia after gaining prestigious and competitive international study scholarships from the Federal Government.

Michael Jefferies of Buderim and Myles Kreis of Hervey Bay were presented with $65,000 New Colombo Plan Scholarships by Foreign Minister Julie Bishop at a recent national awards ceremony in Canberra.

Myles, a third-year combined Bachelor of Business/Commerce student at USC’s Fraser Coast campus, was named a New Colombo Plan Fellow after being ranked as the top candidate for South Korea. He is the first USC student to achieve this honour.

The 23-year-old will study international business, management and the Korean language at Seoul’s Konkuk University, and complete an internship for six months at one of South Korea’s major multi-national companies.

“I believe coming from a small regional area should never hold you back,” said Myles, who grew up on his family beef property at Gayndah, west of Maryborough.

This mantra gave the third-year Bachelor of Business/Commerce student the confidence to apply for the scholarship – a Federal Government initiative that supports a select number of high-achieving undergraduates to work and study in 40 locations across the Indo-Pacific region.

“I was always told that I could not compete with people from large cities because I grew up in a regional/rural community,” Myles said.

“The scholarship is an amazing opportunity for my own career and personal goals, but it also sets an example for other regional students that their opportunities are not limited because of where they live,” he said.

Twenty-two-year-old Michael, an Australian finalist in this year’s Law Student of the Year Awards, will study at one of Singapore’s leading universities next year.

The Bachelor of Laws/Bachelor of Commerce student will gain international law experience by completing internships with corporate law firms in Singapore and potentially Hong Kong and China.

With a goal to work in international corporate law, Michael said the scholarship would open many doors throughout his career.

“The experience of working and living in Singapore and completing advanced university electives will allow me to specialise my skills early on,” he said

Michael believes his strong academic record, complemented by extensive leadership and extra-curricular activities, gave him the edge in the highly competitive selection process.

He is currently the chairman of international refugee advocacy organisation World for Refugees, an elected student member of the USC Council and has led several student groups at USC, including the Student Representative Council.

In addition to the two scholarship recipients, hundreds of USC students will have the opportunity to add a global dimension to their degrees in 2018.

USC has secured $935,400 in New Colombo Plan Mobility Grants, which will assist almost 250 students to engage in a range of short-term study opportunities, including clinical placements, research and internships in countries such as Fiji, Japan, Cambodia and India.

USC will also receive $72,000 in Endeavour Mobility Grants, administered by the Department of Education and Training, to allow a further 32 USC students to undertake short-term study in counties including USA, Ecuador, South Africa, Vietnam and Indonesia.