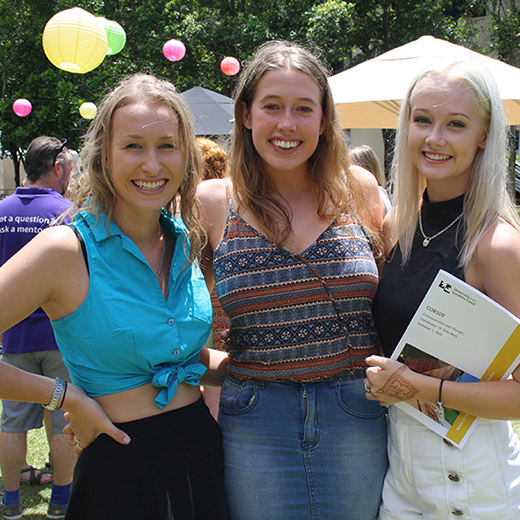 Thousands of new USC students will start Semester 1 with a bang as Orientation Week kicks off at USC’s Sippy Downs campus next week.

About 4,500 new students are expected to start classes across USC’s campuses from Monday 27 February, out of a total enrolment of 13,600 expected in Week 1.

The biggest ‘Orientation to USC’ crowds are expected on Tuesday 21 February, which will begin at 9am with an official welcome from Vice-Chancellor Professor Greg Hill and a commencing class of 2017 group photo.

This event will include the launch of USC’s new Reconciliation Action Plan, a three-year strategy that sets out the University’s commitments to helping Aboriginal and Torres Strait Islander students achieve success.

Stalls showcasing USC’s range of student groups, clubs and societies will open from 9.30am, while a free lunch, entertainment and a Quidditch match will be held from noon.

Tours of the campus, USC’s ‘The Green Place’ and the library will run throughout Tuesday 21 February.

On Thursday 23 February, Student Guild Day will include a tree planting event from 8.30am, as well as a ‘speed friending’ event to get new students mixing and mingling.

New International students also will attend an Orientation event at the Innovation Centre on campus from 9am on Monday 20 February.

Professor Hill encouraged new students to attend Orientation. “It is a great way for students to become familiar with the campus, interact with other new students and prepare themselves for a great year of university,” he said.

USC will welcome about 150 new students enrolling mid-year at its Fraser Coast campus.

USC Gympie will welcome more than 60 new students who have opted to start their studies at the halfway point of the academic year.

Two Danish and Swiss students seeking postgraduate business qualifications, a Brightwater resident hoping to be a physical education teacher and a Melbourne assistant nurse aiming to further his career were among hundreds of enthusiastic faces at USC Orientation today.

Preparing for university study will be a sweet experience for more than 1,800 new students starting at USC’s Sunshine Coast campus in Semester 2, with a free pancake breakfast to launch Orientation festivities on Monday 15 July.

Crowds of keen students hailing from Mackay to Mango Hill, and Melbourne to Maryland USA, brought colour and excitement to the USC Sunshine Coast campus for Orientation today, Monday 18 February.