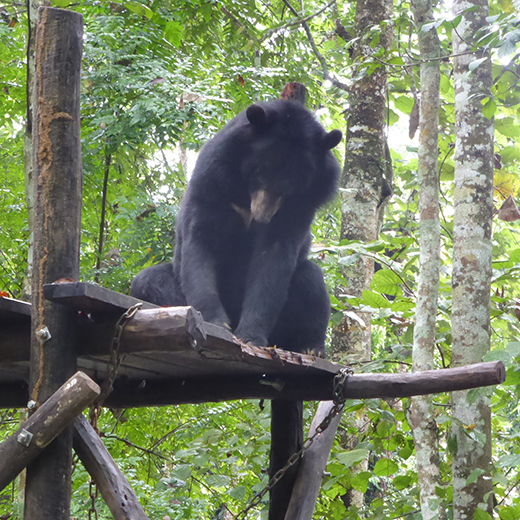 USC Engineering students will be designing bridges and shelters with a difference this semester – the structures will be built specially for cute, cuddly sun bears.

In a unique work placement, six Civil Engineering students will be selected to travel to the Free the Bears sanctuary in Laos to begin designing new infrastructure for the world-class wildlife centre.

The work – including new enclosures, an overhead bridge to transfer bears, and a training cage – will be part of a major expansion for the sanctuary, which rescues and rehabilitates mistreated sun bears.

USC Associate Professor in Hydraulic Engineering Terry Lucke said it was a unique opportunity for Engineering students to use their skills on an international project while they were still at university.

“We’ll have six second-year and third-year students travelling to Kuang Si in Laos to scope out the projects and come up with potential solutions,” he said. “We’ve developed a ‘wish list’ with Free the Bears – everything from bear shelters right through to sewage works.

“Next semester, we’ll have a new cohort of students go to Laos to actually build and construct the infrastructure.

“A project like this shows the wide range of directions that a career as an engineer can take someone. To be playing a part in your second or third year of study is pretty unique.”

It will be the latest project in a long-running partnership between Free the Bears and USC, with Environmental Science and Animal Ecology students previously undertaking work placements at the sanctuary.

Dr Lucke, who leads USC's Stormwater Research Group, said the partnership would become even bigger as Free the Bears relocated to a new 25 hectare site to care for increased numbers of the vulnerable species.

“That expansion will create some engineering projects that are pretty large in scope, like creating an energy-efficient wastewater treatment facility and a water reticulation plan,” he said.

“Those will lend themselves perfectly to final-year engineering projects, where they’ll function as a design team coming up with a real-life system design.

“There are fantastic opportunities for students, and I think it will really be one of our showcase projects that makes USC Engineering stand out.”

The first six students to travel to Laos will be chosen through a competitive application process, with funding provided by the Australian Government’s New Colombo Plan short-term mobility grants.

Students gearing up to graduate this year from two of USC’s most popular degrees have gained vital job information direct from some of the biggest employers in their industry.