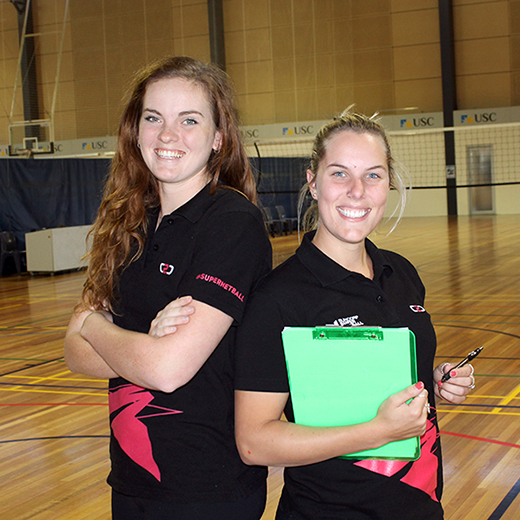 The tournament was the next step up for the pair after impressive performances at each home game of the USC-based Sunshine Coast Lightning, with Sarah acting as match caller and Teegan entering every play into specialised tracking software in real time.

The duo has been asked to continue this work in Melbourne in October at the Fast Five international netball series, while Sarah has also accepted a role at the Gold Coast Commonwealth Games next year.

Teegan, who is originally from Gladstone, said it had been a thrill to work so closely with the USC-based Sunshine Coast Lightning team in a professional sports broadcast environment.

“When our uni lecturers let us know about the job with Champion Data, I just thought: ‘wow, this is a chance to work around an elite sporting team – what an opportunity’,” she said.

“Sarah talks for the whole game, calling every play – ‘yellow centre, yellow wing attack receive, rebound’ – while I log it all into a computer, which connects to the TV broadcast team. We just seemed to gravitate towards our different roles.

“Having accurate statistics straight away is absolutely crucial for the commentators, so it’s a high-pressure role, but really exciting as well.”

Sarah said she was eagerly anticipating building more international match experience at the Fast Five tournament and the Commonwealth Games.

“It’s a nice pat on the back to be chosen for such major events,” she said. “It’s a unique role, and it feels really special to be part of the team bringing netball to a wider audience as well as informing the teams’ performances.”

USC Senior Lecturer in Biomechanics Dr Mark Sayers, who is the University’s Deputy Head of High Performance Sport, said the students were relishing the chance to use knowledge from their degrees in a professional setting.

“This is one of the many flow-on effects that have come from USC’s High Performance Sports Program,” he said.

“This is not just about the opportunities it creates for athletes, but there are also a large number of support and administration opportunities for students interested in elite sport.

“We really emphasise the importance of gaining industry experience here at USC, and this has been a fantastic opportunity for Teegan and Sarah to build their networks. They’re enthusiastic, switched-on students and they’ve clearly performed incredibly well.”