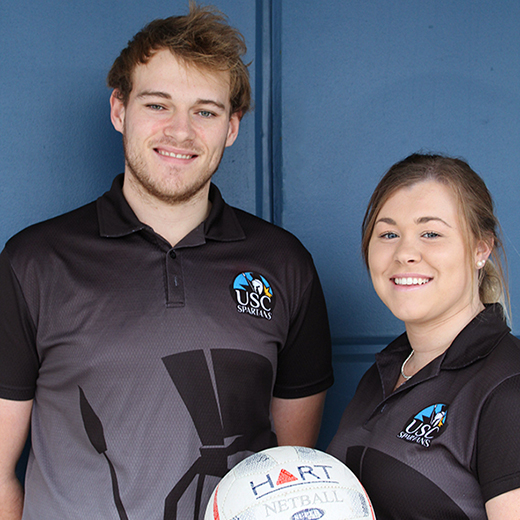 Almost 90 USC student athletes will head to the Gold Coast this weekend to vie for glory at a national university games tournament from 1-5 July.

The athletes will be among thousands of students from universities across Australia competing in sports including basketball, football, netball, tennis, touch and volleyball during the Nationals Division 2 event run by Unisport Australia.

USC women’s captain Kristi Podlich, 21, of Palmview will compete in her fifth tournament as captain of the mixed netball team, which is tipped to feature in the finals.

“We came third last year and this year we’ve got a much stronger team,” said Kristi, who is studying Primary Education.

“We’ve been hammering our training up to four times a week and have had great support from our coach. With a trial match earlier this year, we beat the other team by 50 points so we’re hoping to do really well.”

USC men’s captain and basketball manager Zachary McAulay said the USC basketball team was aiming to finish in the top half of the field.

“Traditionally we’ve been at the back of the pack, but we might surprise a few people this year,” the Criminology and Justice student said.

“We have got a bit of competition but we should do well,” he said. “Other universities always ask how we do it. We’ve got a great culture here and the students love it.”

USC’s student athletes have received financial assistance from the University for uniforms and accommodation.

USC will hold its annual Open Day at its Sunshine Coast campus at Sippy Downs from 9.30am-2pm on Sunday 22 July. For more details, go to: www.usc.edu.au/open-day