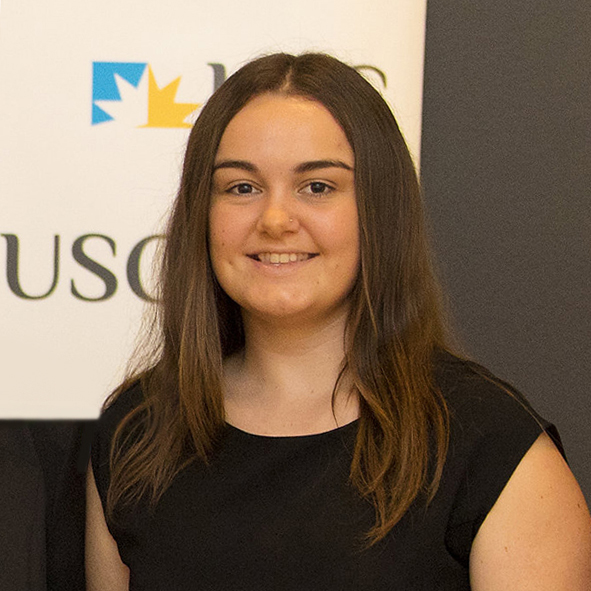 An OP1 student who wants to pursue a career in embryology to help bring “little miracles into the world” has received a prestigious USC Thompson Excellence Scholarship.

Ciara Treacy, 18, who was Mountain Creek State High School’s dux last year, said the award would give her the head start she needed in her Bachelor of Biomedical Science (Accelerated) program.

“I have a lot of textbooks to buy and some other materials I need for university, so that’s what I’m going to spend the money on first,” Ciara said of the scholarship, which will provide her with $4,000 each semester.

“I’m very honoured and humbled to have been chosen for this special award.”

Ciara’s accelerated program means she will complete her degree in just two years instead of three, laying the foundations for her to later undertake a PhD in embryology research through USC.

“I find the idea of dealing with human life through embryology very appealing,” Ciara said. “It can make such a difference to someone who’s infertile and can’t have kids. You can help change their life.

“I want to help bring little miracles into the world through science. That’s just really cool.”

Ciara, who lives at Mountain Creek, said she chose to study at USC so she could remain on the Sunshine Coast where she has been working as a tutor.

Ciara, who also plays at five-eighth for a Nambour Crushers women’s rugby league team, was one of four USC students to receive Thompson Excellence Scholarships at a special ceremony on campus this week.

Donors Roy and Nola Thompson personally presented the scholarship to Ciara during the ceremony at the USC Art Gallery.

Wynnum’s Joshua Dean has swapped one beachside location for another to study a Bachelor of Medical Science (Accelerated) at the University of the Sunshine Coast, with the assistance of USC’s highest scholarship honour.

After taking a gap year to travel through Canada, undertake work experience in three different industries and work in the real estate sector, Ilkley’s Oscar Noble has begun a Bachelor of Commerce (Accounting) with the help of an esteemed USC scholarship.