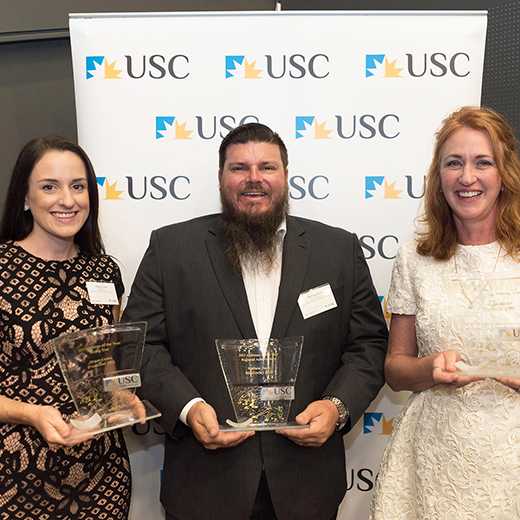 The University of the Sunshine Coast is calling for nominations for its annual Outstanding Alumni of the Year Awards.

USC wants to hear from employers, parents, family, friends and colleagues of USC graduates who have excelled in their pursuits since completing their degrees.

Nominees can be from any field of endeavour, with previous award winners including those involved in community work, business, scientific research and international aid.

Nominations will close on Monday 2 July and winners will be announced in September.

The three award categories are Outstanding Alumnus of the Year; Regional Achievement (for graduates shining in the broader Sunshine Coast region or another regional community); and Rising Star (for graduates aged 35 years or younger, or who graduated in the past five years).

USC Vice-Chancellor Professor Greg Hill said the awards provided a great opportunity to pay tribute to USC graduates who have achieved at a high level in their careers or community pursuits.

USC’s Alumni Relations Officer Anita Edmonds said previously nominated alumni who were unsuccessful could be renominated, and self-nominations would be accepted.

“The awards will be presented at the 2018 Outstanding Alumni Awards Ceremony at USC on Wednesday 12 September. This event will be a great chance to celebrate the graduates with our community, supporters and fellow alumni.”