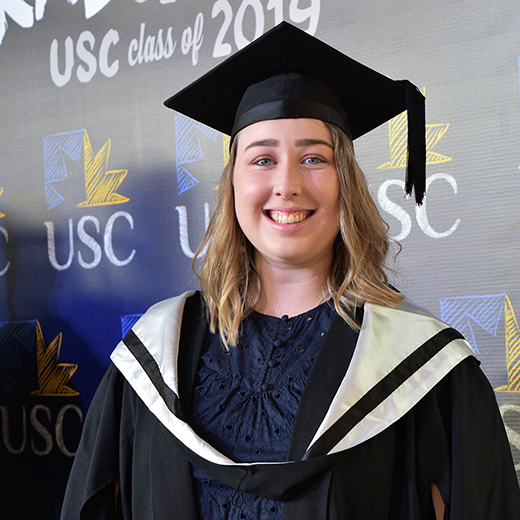 Georgina has begun work as an occupational therapist with the Education Queensland in Bundaberg, supporting primary and secondary school students who have a verified disability to access, participate and achieve within school.

The 21-year-old, who received a USC Medal for Academic Excellence at the graduation ceremony, said her Honours thesis into healthcare workers’ understanding of mental illness in Vanuatu had fuelled her interest in postgraduate research.

“This was an inspiring, rewarding experience from which I gained both clinical skills and interpersonal skills from relating to people from a different culture,” Georgina said.

As part of the placement, she investigated different perspectives on the cause, diagnosis and treatment approaches for common mental health conditions in Vanuatu, which formed the basis of her thesis.

“I aim to have a paper on my research published sometime this year and I am excited to present my findings at the Occupational Therapy Australia National Conference in July,” she said.

USC’s Medal for Academic Excellence was one of many honours for the former Shalom College student, who graduated with a Grade Point Average of 6.6 out of a possible 7.

Last year, her undergraduate research and academic achievements were recognised with a student award by Occupational Therapy Australia.

During high school, she received several awards, including the Caltex All-Rounder Award for excellence in academic, leadership, sporting and community service activities.

Georgina’s inspiration for becoming an occupational therapist came from her mother, an OT with Education Queensland and her aunt, a teacher who works with children with autism.

Working in paediatrics over the past few months had further increased her interest in child and youth mental health.

“The most rewarding aspect of my new job is getting to know so many resilient school students who continue to strive to do their best despite facing many challenges,” she said.

“It is amazing to see how making some small adjustments can make their experience at school so much more enjoyable and successful and allows them to learn in a way that makes sense to them.”

Georgina said there were several areas in occupational therapy that could benefit from more evidence-based investigation and she hoped to eventually conduct PhD research that could inform practice, policy and education.

A love of sport and a desire to help young people have inspired the career of Burpengary 23-year-old Mitchell Fraser, who this month graduated from USC with a Master of Teaching (Secondary).

Bundaberg’s Hollie Cooper has been awarded one of USC’s most prestigious scholarships for first-year students.