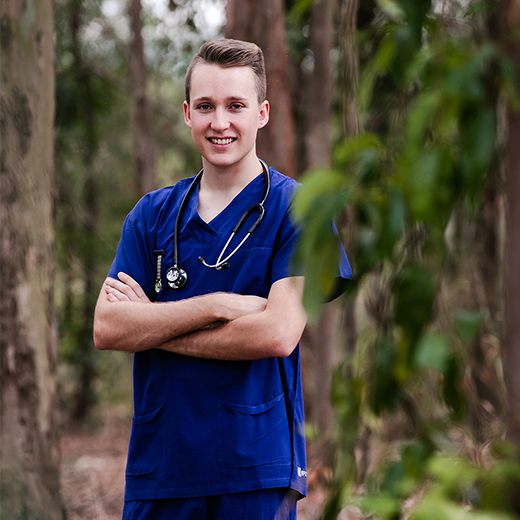 A registered nurse who commuted up to three hours a day to get his university degree in Sydney while living in Gosford has jumped at the chance to study another passion at USC Moreton Bay – just 10 minutes’ drive from his home at Griffin.

Steven Benbrook, 23, has received an early offer to study a Bachelor of Environmental Science at USC Moreton Bay in Semester 1, 2020.

“I’ve always been interested in the environment and wildlife but I was accepted into nursing straight from high school in Gosford so I completed that and started working,” Steven said.

“Now I’m part-time and I have the opportunity to challenge myself and get another degree. With two degrees, I can fulfil my passion for the environment as well as for people.”

Steven said he applied to other universities last year but turned down an offer after he learned that USC would be opening its Moreton Bay campus.

“I’d heard about the University’s reputation for being warm and accepting, and I had friends at USC on the Sunny Coast, so I felt it would work out better if I waited a year until Moreton Bay was opening.

“And it’s worked out fantastically. I’m really interested in the course content and I’ll be able to attend lectures and study in the library and enjoy campus life while still working part-time at the hospitals at Caboolture and Chermside.

“Because I’m relatively new to Queensland, I’m also excited about forming friendships with people who have similar interests and are motivated about going to uni.”

Steven, who has volunteered at a wildlife hospital and the RSPCA, said he hoped to work on conservation programs, possibly in local government, while continuing his nursing career.

USC Moreton Bay will open in early 2020 with a state-of-the-art foundation building that includes a full suite of university services. The three-storey multi-purpose building is the first stage of development of the university precinct that is expected to attract 10,000 students enrolled in more than 100 programs by 2030.

Applications to study at USC Moreton Bay are open online.

For about 150 school leavers from the Moreton Bay region, there is no stress-filled lead-up to receiving their OP scores this Saturday – most are already enrolled in their preferred course.

Samantha Forte of Narangba is looking forward to boosting her parents’ pizza business after signing up to study Business at USC Moreton Bay next year.