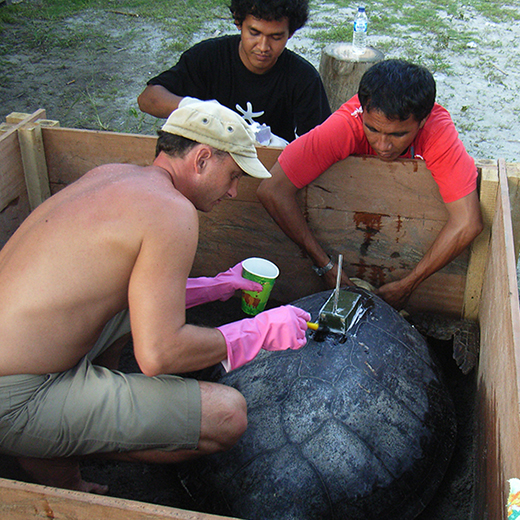 An international oceanographer working to save vital green turtle nesting sites from poaching on islands off West Papua will give a free public lecture at USC Sunshine Coast on Tuesday 19 February.

Dr Geoffrey Gearheart, who moved to Caloundra four years ago with his marine geophysicist partner, will present his talk on ‘Protecting sea turtles of the Coral Triangle and the long-term benefits of conservation tourism’.

The talk is a joint initiative of the Royal Geographical Society of Queensland and USC’s Geography discipline.

“In 2005, I teamed up with Papuan non-profit organisation ‘YPP’ to save Raja Ampat’s turtle nesting sites from poachers,” he said. “We negotiated with traditional owners, built a patrol post and trained former poachers to protect the animals.

“This has helped achieve a five-fold increase in nests at the rookery, from 900 in 2006 to more than 4,500 in 2016. In addition, the reefs have recovered from blast fishing and the protected resources attract ‘conservation tourists’ who provide income to the traditional owners.”

Dr Gearheart, who volunteers with Sunshine Coast TurtleCare, said he was looking forward to giving the public lecture at USC.

“I find people on the Sunshine Coast are very conservation-minded, especially those who have had long careers and are now free to contribute their time to the environment.”

The French/American citizen has a PhD from the Scripps Institution of Oceanography in San Diego, where he specialised in the oceanic dispersal of leatherback hatchlings and the Antarctic distribution of megafauna such as emperor penguins and seals.

USC Associate Professor of Geography Jennifer Carter said the lecture would appeal to a wide range of people interested in the global environment, wildlife and natural sciences.

She said it also related to USC’s Animals and Society course, which examines conflicts between the needs of humans and animals, such as turtle breeding habitats.

The public is welcome to attend the event at USC’s main campus at Sippy Downs on Tuesday 19 February from 7.15pm to 9pm. Contact 5430 1238 or email jcarter@usc.edu.au.