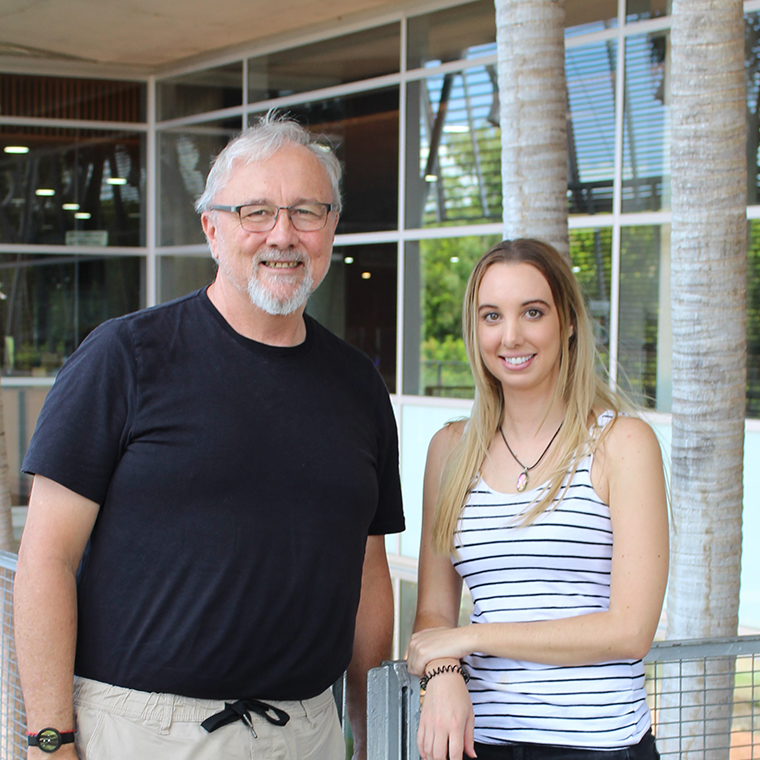 A new field of research for USC is uncovering different ways maths could be used by engineers, physicists and other professions that don’t even exist yet.

“Algebra is the study of patterns that occur in maths and my thesis is based around understanding the patterns I’m uncovering and then looking at how those patterns could be used,” Lauren said.

“The actual applications of the maths are unknown so I’m essentially making a mathematical map for others to use and how they apply the findings is up to them.”

Thesis advisor and USC Mathematics lecturer Dr Rob McDougall said the type of mathematical research Lauren is undertaking is ahead of its time.

“The findings from Lauren’s thesis work will sow the seed for possible futures and indicate where improvements can be made in the way maths is used to make models.

“It’s like the work of the English mathematician George Boole who invented the pattern of what is now the basis of modern digital computer logic back in the 1800s, a long time before computers were invented – he found the pattern, but it didn’t have an application until science and technology caught up.”

Lauren presented initial findings from her thesis titled ‘On Base Radical Theory in Finite Settings’ at the recent international Asia-Australia Algebra Conference in Sydney to more than 100 delegates from 20 countries.

Her presentation was awarded the Gordon Preston Prize for the best student talk of the conference.

Dr McDougall said Lauren is first Queenslander to ever win the award.

“This recognition is not only acknowledgement of Lauren’s incredible work to date and her promising career in the future, but also shows the depth of USC’s mathematical research and our ability to nurture and inspire talented students.”

Lauren first began a Bachelor of Education at USC with a view to become a high school maths teacher before starting her PhD in 2016.

“I realised that I loved mathematics and I wanted to study it further before I went on to teach it,” Lauren said.

“I still plan to teach but now that revolves around a university lecture theatre rather than a Grade 10 classroom and I hope to be able to do that at USC,” Lauren said.

USC graduate and PhD student Lydia Fairhall has managed to secure not just one, but two, of Australia’s most prestigious creative arts grants.

Green-eyed monster could be good for business

Encouraging envy between consumers could boost your business, according to a USC researcher shedding new light on how it drives consumer behaviour.

USC academic lays down the law with PhD

A police officer-turned academic has become the first person to complete a Doctor of Philosophy (PhD) in Law through the University of the Sunshine Coast’s Law School.

USC will be cheering on its first Winter Olympian tomorrow (Friday 16 February) when PhD student Klaus Jungbluth competes in the 15km cross-country skiing event at Pyeongchang.