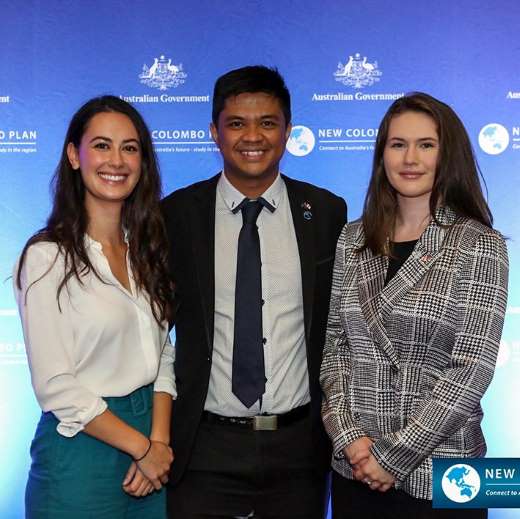 The pair, who will soon work and study in Japan for 12 months, were officially recognised at a formal reception in Canberra earlier this week.

It will be a return to Japan for Creole, 23, who lived there for 18 months to assist in the wake of the 2016 Kumamoto earthquakes. She also completed a short-term mobility course funded by the NCP in her first semester break this year.

“I participated in a number of cultural experiences which helped deepen my appreciation for Japanese culture and traditions and inspired me to want to return for study,” she said.

“This scholarship will allow me to study Japanese language and culture, and international relations at Doshisha University in Kyoto as well as hopefully intern with the Australian Embassy in Tokyo, and the United Nations Development Program in South-East Asia.”

Amy, 20, is also looking forward to studying at Doshisha University next year.

“I’m doing an extended major in Japanese and minoring in English and Creative Writing, so I’m thrilled to have a whole new world of opportunity made available to me,” she said.

“After I complete my degree, I intend to study a Master of Teaching (Secondary) and would one day love to teach at universities. My long-term goal is to connect schools in Japan and Australia and create exchange programs.”

USC’s Raymart Walker received a New Colombo Plan scholarship in 2017, affording him a full scholarship to study and complete an internship in Japan.

He’s been announced as an Alumni Ambassador for the program and completed a two-day orientation and training day at Parliament House in Canberra this week.

“The scholarship experience transformed my perception of the world and I’ve made lifelong friends from all over the world,” Raymart said.

“Living in a different cultural environment for over 16 months has strongly contributed to my ability to understand and work with different cultures and I feel really privileged to be selected as the NCP Ambassador for USC,” he said.

“I think that many students aren’t aware of the benefits of an Indo-Pacific experience in their undergraduate program, so considering this is our region, I would love to inspire others to study in the Indo-Pacific and to help empower my peers to develop new skills.”

Globetrotting USC Information and Communications Technology graduate Joseph Davies has settled in the nation’s capital to begin a sought-after role with the defence sector.

Two outstanding USC students have been recognised among the best in Australia after gaining prestigious and competitive international study scholarships from the Federal Government.

A Mumbai stockbroker now living at North Lakes has gained a Faculty medal along with her Bachelor of Business from USC.

Being in the right place at the right time is what USC student Josh Millican claims is the secret to him winning the University’s inaugural wildlife photography contest today.