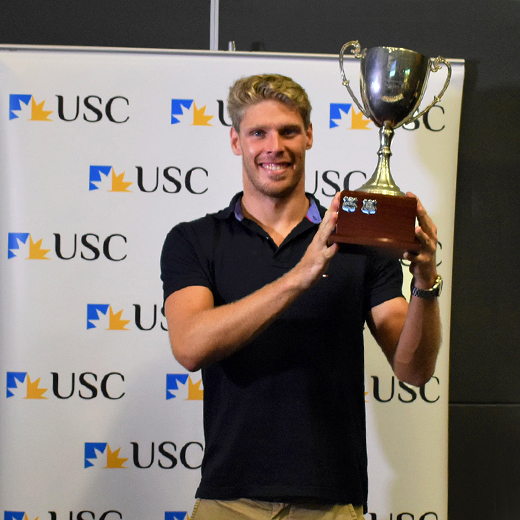 Athletes vying for and selected in Australian teams for the Tokyo Olympic Games are among the students in the running for prizes at USC’s annual Sports Awards Ceremony on Thursday 14 November.

The ceremony will be held at the USC Stadium function room (Lightning Lounge) at Sippy Downs at 6pm, with guests arriving from 5.30pm.

It will include a guest presentation by champion long-distance swimmer and USC graduate Kareena Lee, 25, who will represent Australia in the 10km open water swim at the Tokyo Games next year.

USC Sport Coordinator Gary Moore said the annual ceremony would honour the commitment and drive of student athletes to succeed in sport throughout 2019.

“We’ll be recognising some outstanding performances with the traditional ‘Half Blue’ and ‘Full Blue’ awards for excellence, as well as the Sportsperson and Team of the Year,” he said.

“This year the Sportsperson of the Year award has been sponsored by UniBank, and we’ll present a new prize – the Vice Chancellor’s Sporting and Academic Excellence Award – for the person deemed to have excelled both academically and in their sporting field.”

Mr Moore said the sporting ‘Blues’ tradition dated back t—o 1829, when rowing teams from Oxford and Cambridge universities each tied a blue scarf, one light blue and one dark blue, to their boats to distinguish themselves.

USC will also present Outstanding Service to Sport awards at the ceremony to student volunteers who have helped boost sport at the University.