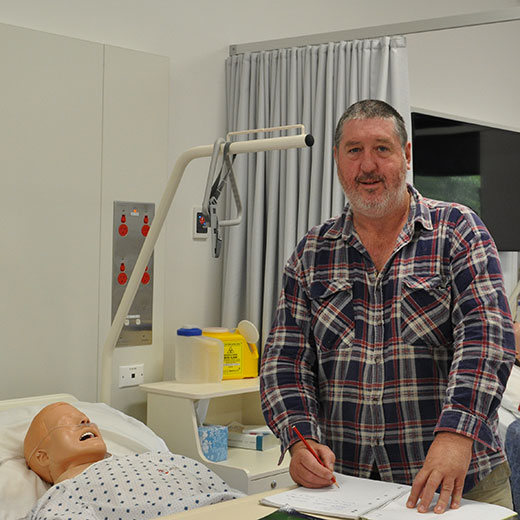 A tomato farmer and former hotelier who decided to try university for the first time at age 50 is revelling in his first year of a Nursing Science degree at USC.

Richard MacDonald, who has run the successful Noosa Reds tomato business with his family for seven years, said he had wanted to be a nurse since he was a child and was finally confident of following a dream to be a volunteer nurse in Ethiopia.

The married father of three said he had the support of his family, including a son also studying at USC, and was embracing the opportunities offered on the campuses at Sippy Downs and Gympie.

“I’ve followed many directions in my life but I got to a point where the boys were leaving home and I had time to re-evaluate,” said Mr MacDonald, of Doonan.

The idea of nursing in third world countries was inspired by visitors to his hotel in Scotland in the early 2000s who were involved with medical charity Mercy Ships.

“I’ve since become friends with a surgeon on the Coast who does voluntary work in Ethiopia and his stories made me rekindle this idea,” Mr MacDonald said.

“Enrolling in TPP (USC’s Tertiary Preparation Pathway program) is the best thing I ever did.”

Mr MacDonald said USC was convenient, had a large number of mature-age students and offered the degree he wanted.

“I’d never been motivated to study previously and I needed to learn the discipline of studying and how to think in a different way,” he said.

“TPP gave me the confidence that I could do something totally different, even chemistry and biology, which I’d always been scared of.

“I was very excited to get into Nursing Science this year and the lecturers and tutors have been really supportive.

“My main motivation is to do voluntary work but I’m sure the new Sunshine Coast Public University Hospital will provide further learning opportunities.”

Rockets will be launched by chemical reactions, music and art will be used as counselling tools, and robots will help solve simulated real-life problems at a USC Experience Day to give students hands-on insights into future careers.

Inspecting state-of-the-art nursing simulation facilities at the University of the Sunshine Coast is high on the agenda for a visiting group from a university in the US.

There was a bright flash of Nepalese culture on show when USC Nursing Science students Diwas Bhandari and Namrata Baskota graduated recently.

USC is preparing to host the biggest health and wellbeing day for Aboriginal and Torres Strait Islander families ever held on the Sunshine Coast.