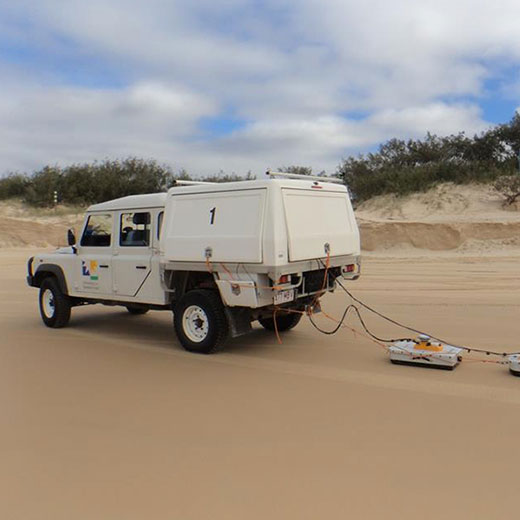 A team of scientists from the University of the Sunshine Coast and the University of Massachusetts in Boston, USA, has located what is believed to be three, century-old Aboriginal burial grounds on Fraser Island.

USC soil scientist Peter Davies said his team used ground penetrating radar (GPR) technology, which provides 3-D images of what lies below the ground surface, to pinpoint graves that are likely to be those of Aboriginal people from the ill-fated Bogimbah Creek mission.

Mr Davies collaborated with USC Science and Engineering lecturer Dr Adrian McCullum and Coastal Geologist and Geophysicist Dr Allen Gontz from the University of Massachusetts to collect data, which has been carefully analysed over the past three months.

They worked closely with members of the Butchulla community, the Queensland Parks and Wildlife Service, South Pacific Strategic Solutions and Fauna and Flora International (Australia).

Mr Davies said the research team was happy to help the K’Gari (Fraser Island) community in such a worthwhile project and to shed some light on a notorious part of the island’s history.

The Bogimbah Creek mission was established on the west coast of Fraser Island in 1897, but appalling conditions caused the deaths of more than 100 Aboriginal people from illness and malnutrition. The mission was abandoned in 1904, but the locations of the burial sites were never marked and were lost to history.

He said GPR was an ideal instrument to locate disturbed ground, human remains and artefacts and had been previously used elsewhere in locating Indigenous burial sites up to 20,000 years old.