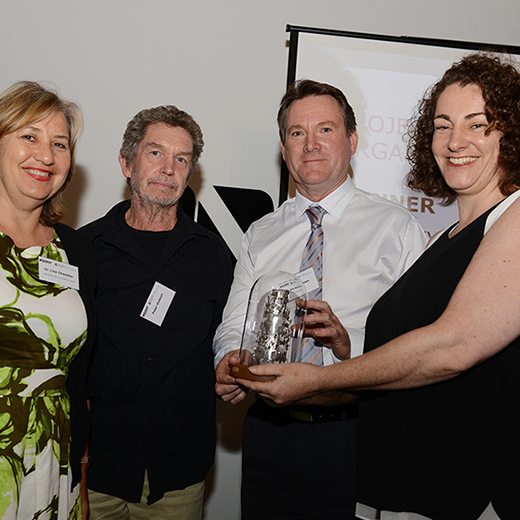 A national art exhibition co-curated by a University of the Sunshine Coast academic has been awarded Queensland’s highest industry accolade.

East Coast Encounter, which uses Indigenous and non-Indigenous perspectives to reimagine the encounter between Captain James Cook’s crew and Aboriginal people in 1770, received the award for best exhibition by an organisation with paid staff.

The exhibition, which was developed from an initial concept by Maleny artist Peter Hudson and funded through the support of Arts Queensland and the Australian Government’s Visions of Australia program, features works by 20 prominent Indigenous and non-Indigenous artists, musicians and writers, shown from multiple perspectives and in various media.

Dr Chandler said it was an honour to have the effort and talents of all contributors recognised through such a prestigious award.

“The aim of East Coast Encounter was to combine historical research and creative practice in order to reimagine this significant historical encounter, and to promote cultural dialogue and reconciliatory understanding,” she said.

“The exhibition has received strong audience attendance and great feedback from galleries, so it’s wonderful to receive similar recognition from the industry via this award.”

East Coast Encounter has been touring nationally since it opened at the Australian National Maritime Museum in Sydney in May 2014, where it was so well received that the museum decided to purchase the entire exhibition for its collection.

The exhibition will be showing at Hervey Bay Regional Gallery from 4 December before travelling to North Queensland in 2016.

Games of wheelchair basketball, inspiring guest speakers and even ice baths are all part of the teaching process for one University of the Sunshine Coast senior academic.