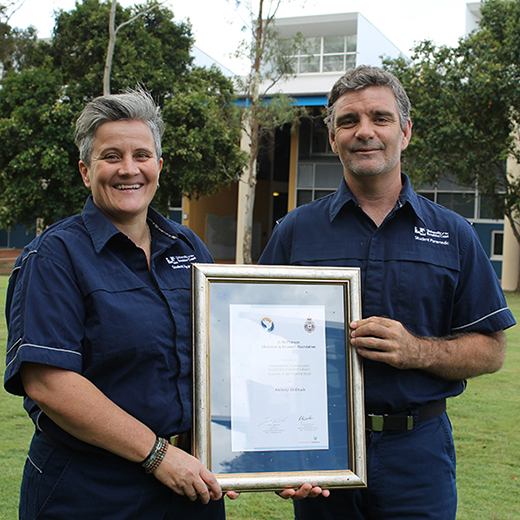 Four Paramedic Science students from the University of the Sunshine Coast have won a Paramedics Australasia Student Scientific Grant for their comprehensive research poster on seizure medications.

Students Anthony McErvale, Janine Summons and Sacha and Kellie-Ann Schuller won the $400 prize for Best Poster for their research poster on the most effective methods of delivering anti-convulsant medications during a seizure.

Anthony said the group had noticed a number of different guidelines for pharmacological interventions in seizures and had aimed to produce a clear comparison of the approaches.

“Refractory [uncontrolled] seizures are associated with increased mortality and neurological deficits, so reducing seizure duration is paramount to paramedic management,” he said.

“The group had a collective expectation to complete the task to a high standard, but we never expected to be shortlisted and chosen for such a prestigious award.”

The award was presented by the KJ McPherson Education and Research Foundation at a ceremony at Brisbane’s City Hall.

USC Lecturer in Paramedic Science Nigel Barr said USC students had shown continued success at the awards, taking out first and second place for Best Paper in the 2014 competition.

“The students have done a considerable amount of work – they’ve done a systematic literature review, they’ve judged the evidence and distilled it down into a poster format,” he said.

“The KJ McPherson awards are extremely competitive, with every university in Queensland that offers Paramedic Science entering their students.

“Conducting analysis like this gives paramedics the skills to make a proper, evidence-informed decision, which translates into better practice.”