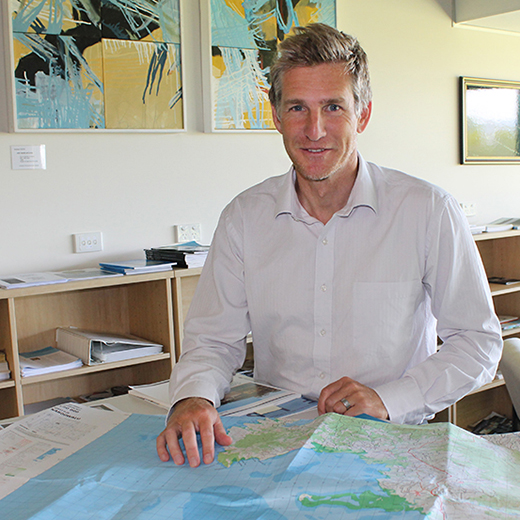 The University of the Sunshine Coast’s standing as an international leader in sustainability research has been recognised with the selection of a USC academic to the steering committee of a new sustainability initiative.

Director of USC’s Sustainability Research Centre Professor Tim Smith was recently appointed to the Scientific Steering Committee for Future Earth Coasts, which aims to improve the resilience of the world’s most vulnerable coastal areas.

The international initiative, comprised of groups including the International Council for Science and United Nations Environment Programme, will develop strategies to take on the challenges posed by climate change, such as sea level rise and ocean acidification.

Professor Smith said he was the only Australian representative on the steering committee, which is responsible for providing expert advice and guiding the strategy of Future Earth Coasts.

“Being appointed to this kind of group reinforces the international recognition that USC has received for its research in areas like sustainable coastal management,” he said.

“It’s gratifying to have been selected to a committee that is made up of world experts in coastal issues. I hope to help them guide efforts towards a more sustainable future for some extremely vulnerable communities.”

Professor Smith said Future Earth Coasts had several main focus areas, including research into the threat of rising sea levels for low-lying Pacific islands and the rapid growth of megacities.

“The world’s population is increasingly becoming concentrated in large urban environments, so we’re seeing the creation of megacities with more than 20 million inhabitants,” he said.

“This global demographic shift is likely to continue and therefore there are likely to be very significant populations affected by coastal impacts, because a lot of these large cities are in coastal zones. It’s a field of research that has huge implications for communities around the world.”

Future Earth Coasts is sponsored by the Science and Technology Alliance for Global Sustainability.