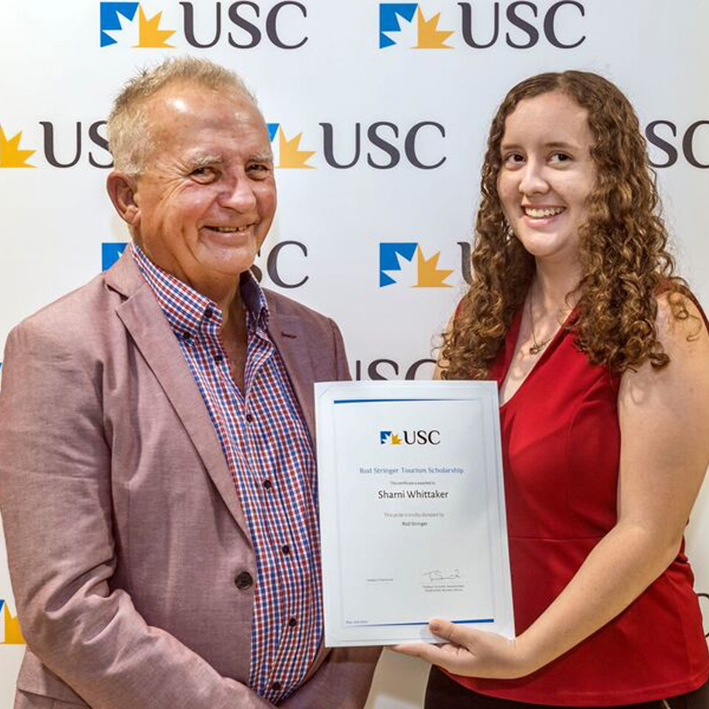 A USC business student who is playing a key role in organising Cancer Council Queensland’s upcoming Sunshine Coast Relay For Life at the University has become the first recipient of a new scholarship for students specialising in Tourism, Leisure and Event Management.

This scholarship, one of 46 awards presented at the ceremony, has been established by tourism industry representative and former owner of Horizons at Peregian resort Rod Stringer.

Mr Stringer has also established the Rod Stringer Prize for Highest Achieving Student in the subject Tourism, Leisure and Special Interests, valued at $1,000, which went to Health Promotion student Casey Windshuttle, 26, of Banyo.

Sharni, who grew up in the tourism mecca of Cairns and aims to work as an events planner at a hotel or resort, said receiving the scholarship was both exciting and humbling.

“This scholarship will help ease the financial pressure of buying textbooks and other necessities, allowing me to focus on my studies,” she said.

Sharni is USC’s Cancer Council Club secretary, and has volunteered to coordinate the opening, closing and candlelight ceremonies for the annual Sunshine Coast Relay for Life at the University on 5-6 May.

The faculty awards ceremony featured the presentation of nine scholarships and bursaries, with winners chosen by a selection panel, and 37 academic prizes awarded to the highest-achieving students in particular subjects or year of study.

The total value of awards presented on the night was $55,350.

Other new donors this year were Evolve Accounting and Advice, Sebastion Marx, and Sean O’Boyle – each of these has established a new prize connected to a specific course which resonates with their own professional fields.

Four students each won two prizes at the awards ceremony.

Paul Hoggard gained the CPA Prize for Highest Achieving Accounting Student and the Save On Tax Prize, and Katie O’Connor earned the Valuers Registration Board of Queensland Prize and another of the three prizes sponsored by Garland Waddington Solicitors.

Jordan rides in to teaching career with scholarship

One of the Sunshine Coast’s best young equestrians has been awarded a new scholarship to support her elite sporting endeavours while completing a double degree at USC.