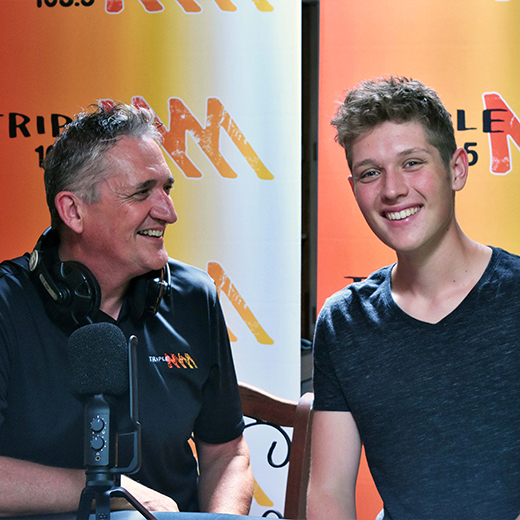 The son of popular, long-time Fraser Coast radio announcer Andrew Bland is planning to follow his father into the media industry and has enrolled in a Journalism degree at USC.

While his father enjoys the free-flowing pace of live breakfast radio, Liam Bland has his sights set on a career as a sports journalist.

“I love soccer, and it would be an absolute dream of mine to eventually become be a play-by-play commentator,” said the 2017 Fraser Coast Anglican College captain and talented Fraser Flames soccer player.

The 17-year-old said growing up with a family member in the broadcast industry ensured a career in the media was always on the cards.

His father and co-host Scott Gilmour have presented their multi-award-winning Big Breakfast program since 1996.

“I’ve always found Dad’s job fascinating. When I was younger I loved going into the studio to observe the way in which he was able to entertain large audiences,” Liam said.

His interest in media was further piqued by work experience at the Triple M studios in Sydney.

“I enjoy writing, have a thirst for knowledge and am a confident public speaker, so I felt that a degree in journalism would allow me to pursue a career that suited these attributes.”

Liam is already working to establish himself as a sports writer by combining his interest in writing with his support for his favourite football team, English Premier League club Chelsea.

“I occasionally write articles for a London-based football news website called Read Chelsea.com, some of which have received over 1,000 reads,” he said.

The high-achieving OP4 student received a Diamond award for academic dedication, subject prizes for mathematics A and drama in Year 12, and played one of the lead roles in the school’s production of Robin the Hood.

When Liam starts his studies on 26 February, he is likely to see a familiar face among the crowd of new students at USC’s Sunshine Coast campus. Logan Gilmour, the son of his father’s radio co-host, has enrolled in a Bachelor of Biomedical Science at USC.

Liam said USC’s Bachelor of Journalism was the stand-out choice when considering his study options.

“After researching university rankings, I was blown away that the percentage of USC Journalism students who gained employment immediately after finishing their degree was much higher than most other Queensland universities.

“I am particularly looking forward to USC’s work placements, and cannot wait to gain valuable, hands-on experience with industry professionals to further develop as a journalist.”

Applications remain open to study at USC this semester.