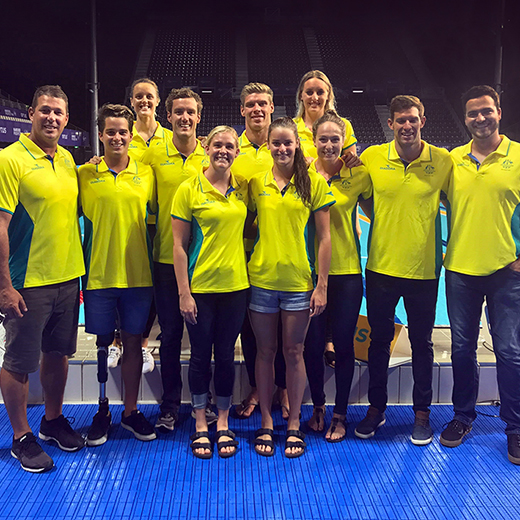 Nine USC Spartans have gained selection in the 70-strong Australian swimming team for the Commonwealth Games that will start next month on the Gold Coast.

The Spartans shone at the four-day 2018 Hancock Prospecting Australian Swimming Trials at the Gold Coast Aquatic Centre that finished on Saturday 3 March, earning a swag of medals and achieving many personal best times.

Kaylee McKeown caused possibly the biggest upset of the selection trials, pipping dual world champion Emily Seebohm by 0.01 of a second on Friday night to win gold in the 200m backstroke and claim her first senior national title.

She narrowly missed claiming a second title on Saturday night in the 400m individual medley. At 16, she is the youngest member of the Australian swimming squad.

The 10 swimmers bring the total of USC-associated athletes selected for the Games to 17, with four netballers from Sunshine Coast Lightning and three cyclists from the Australian Cycling Academy announced as competitors in recent weeks.

USC High Performance Student Athlete Renae Saunders has been selected in the Australian Karate Team to compete at the 13th Chito-Ryu International Soke Cup in Canada later this month.