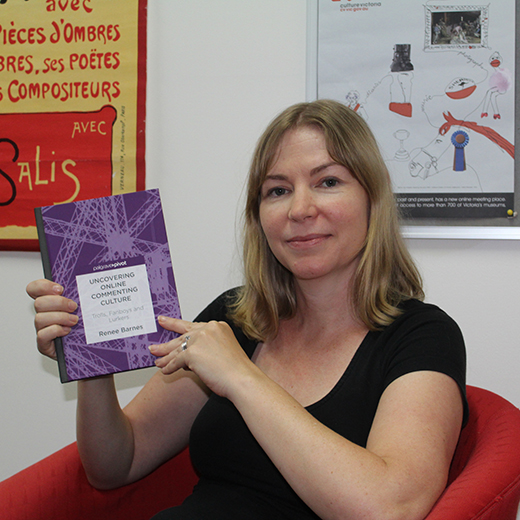 “The online world is where we socialise, it’s where we find work, it’s where we meet our partners,” Dr Barnes said. “But there seems to be this overwhelming problem of infidelity and abuse online.

“People just seem to shrug their shoulders about it and say, ‘that’s the internet’. But I argue there’s an awful lot we can do to make these spaces more inclusive.”

Dr Barnes – a journalist with more than 15 years’ experience – said online bad behaviour needed to be understood as a social problem rather than just an internet problem.

“We need to start viewing these online spaces as real communities, with a set of social norms, which will create similar expectations that we have in the offline world,” Dr Barnes said.

“Anytime we see inappropriate behaviour, we need to call it out. We should flag it with the person and the platform as well.”

In one chapter of her book, published by Palgrave MacMillan, Dr Barnes looks at the fascinating Gamergate controversy, where multiplayer online games introduced initiatives to combat abusive behaviour.

The movement led Riot Games – publisher of popular video game League of Legends – to introduce a tribunal of players in 2011 who could determine punishment for people involved in uncivilised behaviour.

“Riot Games noticed that people respond to being judged by their peers,” Dr Barnes said.

“That idea has meant people have taken the consequences of their actions more seriously.”

Dr Barnes, who specialises in teaching online and multimedia journalism at USC, said she wanted the book to empower people to act when faced with antisocial comments online.

“By knowing why people make these comments – not just labelling them as trolls – means we can start education earlier,” Dr Barnes said. “But we need to start lobbying for this to be made mandatory.”

Sunshine Coast seniors are giving online games a go, all in the name of science.

An entrepreneurial USC graduate from the Moreton Bay Region has set her career in full swing by launching her own social media business when she was still a student.