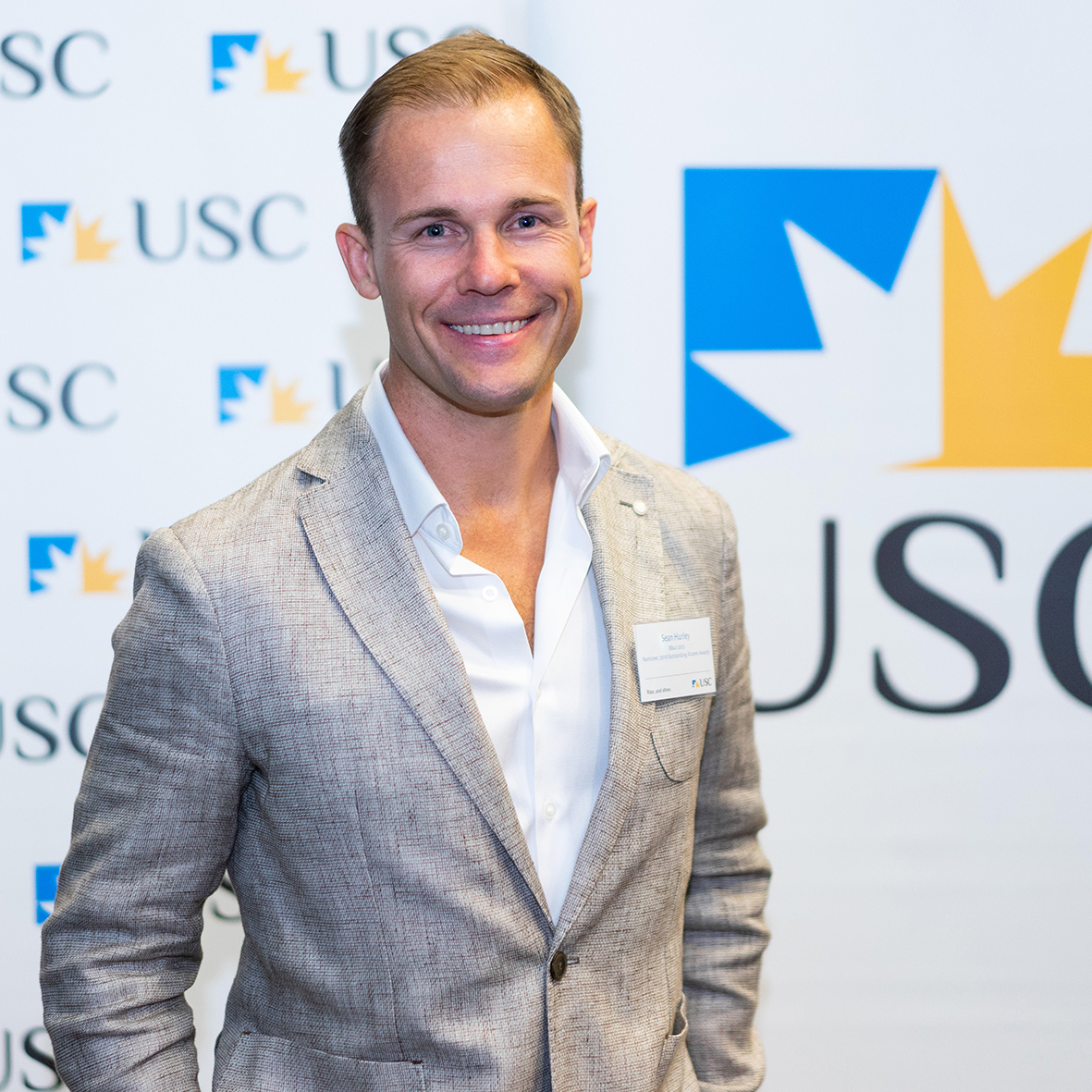 A University of the Sunshine Coast graduate who has led the global expansion of European clothing giant Mango for the past seven years has claimed the title of USC’s Outstanding Alumnus for 2018.

Sean Hurley received the award last night (Wednesday 12 September) at a special function at USC’s Innovation Centre auditorium before a crowd of about 140 people.

Sean, who was among the first intake of students at USC in 1996 when he enrolled in a Bachelor of Business, flew in from Dubai for the event, where he was recognised for his achievements as Country Director for his company.

His work involves managing operations in many countries across Africa, the Middle East and southern Asia. He has overseen revenue growth in those countries to over $A516 million in the past seven years.

“My role at Mango has opened up a world of opportunities for me to build on my career,” he said when he received the Outstanding Alumnus award.

Sean said he had been inspired by the international trips he did as part of his degree at USC and credits his passion for travel as opening the doors to his success.

He travelled to Dubai while completing his study and found his professional life flourished from the unique opportunities available to him there.

“USC lit my fire”, the former Matthew Flinders Anglican College student said. “It was here at USC that I fell in love with international business.

“It’s a real privilege to win this award. I’ve loved USC ever since I studied here with my twin brother. We were foundation students and helped start the USC Barbarians rugby club, so we’ve always had a really strong connection to the place.”

Two other USC graduates were recognised at the Outstanding Alumni Awards for their amazing work in the fields of fundraising and environmental sustainability.

Angela Harrison, who has a Bachelor of Business and an Executive MBA through USC, received the Regional Achievement Award for her fundraising work, currently as Charity Manager at STEPS Charity Ltd.

In 2012, when she was still in her first year of undergraduate study, Angela raised $157,000 in one event for the AGL Action Rescue Helicopter service.

Since then, she has raised millions of dollars for charitable organisations and, in the process, has built relationships with some of Australia’s wealthiest people and most powerful politicians.

Ashleigh Morris, who graduated in 2015 with a Bachelor of Environmental Science, was named USC’s Rising Star for her work in founding a start-up business last year to tackle environmental issues.

Ashleigh and her sister last year launched The Circular Experiment – a company that helps businesses reuse or renew resources. Their clients have included the Queensland Government, Chamber of Commerce and Industry Queensland, the Brisbane Airport Corporation and Lend Lease.

She is now seeking to expand her business globally, starting in South East Asia where she has spent time researching some difficult environmental issues.

Antarctic trailblazer to give public lecture at USC

An 86-year-old retired surveyor named by the Australian Museum as one of the country’s 50 greatest explorers will speak at USC on Tuesday 22 October about the mapping of Antarctica.