Hi, my name is Mason Schremmer and I'm 19 years old. I'm originally from Florida but moved to Hawaii when I was 11, and that's when I started surfing. I've been competing for almost 7 years now, and this is my second year on the WSL Longboard Tour.

When I first started competing, I entered junior contests and worked my way up to state and national titles, and won three national titles for longboarding. Winning my first national title is what really inspired me to want to keep competing and stick with surfing. One of my biggest goals since then has been to win a WSL world title, which is not an easy task.

Competing comes with quite a few ups and downs and lots of learning how to lose, and taking something away from it each time. Sometimes your biggest competitor can be yourself, and I think I'm still trying to overcome that aspect of competing. Last year, the WSL revamped the world longboard tour. We have a new commissioner, who is a very accomplished surfer himself, and we now have three to four events per year instead of just one event to determine the world champion.

For longboarding, the best training you can have is just going out in the water and practising maneuvers or feeling out new boards, that's why I like to surf as often as possible. Of course, it's always good to stay fit for those moments when you just need to paddle, surf a bit further or a bit faster, and I like to do this by running when I can.

Between the new WSL events and a few invitational contest throughout the year, it's really easy to have an overwhelming schedule, which is why I was so glad to find out about USC's HPSA program which helps me to accommodate the travelling that comes with competing. This year I'd really like to keep up with my classes as much as possible while also trying to work my way up through the WSL rankings 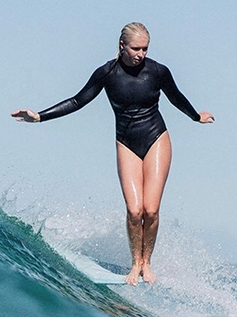