My name is Katja Dedekind and I am part of the Australian Paralympic Swim Team and have been for the past 4 years. I am currently 18 years old and am doing my first year of University, where I'll be studying a Bachelor of Arts majoring in Creative Writing and Publishing. The reason I have decided to do this major is because I am book worm and would love to be a part of the industry! I am on the Paralympic team because I am visually impaired, being blind in my right eye and having tunnel vision in my left. It is kind of ironic being vision impaired and a book worm, but it works itself out!

I began swimming in 2014 due to rehab but then started enjoying it while training alongside my twin brother. In 2016 I made my first Australian team where I competed at the 2016 Rio Paralympic Games and won Bronze in the Women's S13 100m backstroke. Then in 2017 I made the Para World Championship team, which were unfortunately delayed due to the earthquakes in Mexico. In 2018, I competed at the Para Pan Pacific Games in Cairns where I won a gold, silver and bronze. Last year I qualified for the 2019 Para World Championships and made finals in every event I participated in. I am now hoping to qualify for my 5th team to compete at the 2020 Tokyo Paralympic Games in August.

I applied for the HPSA program because of the great support that was available and the assistance offered to lessen the stress during studies, training and competition. I feel honoured to be in the program with other athletes of all levels who understand the demands of a high performance athlete.

My training schedule is quite full on/ My squad and I do an unusual training regime but it shows that it works with our results. The next few months will be quite busy leading into Tokyo trials, with training increasing in aspects, this being both in and out of the water. It will mean more sacrifices will have to be made and that is what it takes to be a part of the team and to be a podium athlete. This does mean that I will be away from University quite a lot this semester, but with the support of the HPSA program I feel confident it will all go according to plan. 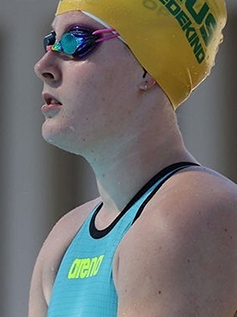