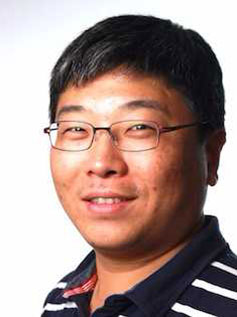 Dr Wang was awarded his PhD in physical chemistry from the University of Science and Technology of China in 2008. He then moved to Australia, and undertook postdoctoral research at the University of Adelaide, where he had been exploring the use of negative ion electrospray mass spectrometry for the sequencing of peptides and other interesting ion chemistry processes in gas phase. In addition to mass spectrometry, he has extensive research experience computational chemistry (both quantum mechanics and molecular dynamics).

Dr Wang joined USC in 2012 to continue his research in the areas of peptide chemistry, mass spectrometry and functional proteomics. One of his ongoing interest is to identify and characterise aqueous pheromones and host-defence bioactive peptides from different model animals. He has been working on model fish, Tilapia, and the project aims to discover the peptides responsible for primordial germ cell migration. He has contributed to uncovering possible biofunctional peptide hormones in land snails using a peptidomics approach, and designing peptides-based inhibitors of these pheromones/receptors. Dr Wang has made a significant dent in establishing the proteome of marine sponge, Amphimedon queenslandica, and has identified several bioactive peptides, which are presently under further evaluation and analysis using bioassays.

Dr Wang has also been seeking to uncover potential alarm peptide kairomones of the giant triton snail, which is the major predator of crown-of-thorns starfish (COTS); the outcome of this project could unveil the chemical communication between COTS and the triton, to help develop controlling method for COTS in Great Barrier Reef. Under the umbrella of the geome project of Biomphalaria glabrata (the major intermediate host of parasite Schistosoma mansoni), Dr Wang has contributed to deciphering the chemical communication between the parasites and host snail, that the parasites are attracted to certain components of snail mucus, and am seeking to reveal the structures of these molecules using peptidomic techniques.

The Giant Triton and its Potential for Mitigating Crown-of-Thorns Starfish Outbreaks: Development of Aquaculture Methodologies to Produce Giant Tritons for Potential Re-stocking. Reef 2050, 2017-2020.

Investigation of pheromones in the crown-of-thorns starfish. Reef Rescue, 2014-2016.

Development of a peptide based interleukin 10 inhibitor for better immunotherapy. Sunshine Coast Council, 2014-2015.

Discovery of novel bioactive and bioengineering proteins and peptides from marine sponge Amphimedon queenslandica, and their applications in drug and biomaterial developments. University of the Sunshine Coast, 2013-2014.