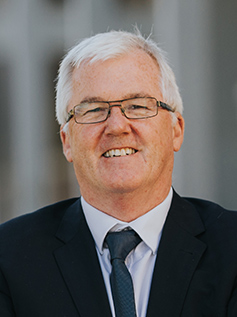 Social justice and equity have been a strong component of Tim's work in and beyond the higher education sector. He also has a Graduate Certificate in Wiradjuri Language and Nation Building (CSU 2015), and in 2017 became a Principal Fellow of the Higher Education Academy (HEA), which recognised his work on inclusivity in higher education. Tim commenced in the role of Deputy Vice-Chancellor (Academic) at USC on 4 June 2018.

Tim's research background has been focussed around characterisation of biomaterials in using large scale infrastructure such as synchrotron and neutron sources. He has published over 100 papers on the structure of collagen, elastic proteins and bone. Recently he has studied the change of biomaterials in the context of cultural heritage and archaeological research and approaches to Indigenous inclusivity in academia.

Member of the Athena SWAN SAGE National Advisory Group for gender equity since 2016.

Member of the project Steering Group for Improving Aboriginal Engagement at Lake Mungo, (funded by the NSW Environmental Trust) since 2016.