Named as one of Australia’s 30 'most dynamic scientists and technologists' (Science and Technology Australia) and recognised as a SuperStar of STEM 2017. 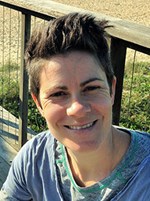 Associate Professor Frere is an empirical biologist with a primary research interest in animal behaviour and genetics. She has published widely including on lizards, giraffes, cetaceans, porpoises, koalas and kangaroos.

Associate Professor Frere was central to the establishment of USC’s Global Change Ecology Research Group, which draws together early and mid-career academics focussing on the impacts of anthropogenic change on biodiversity and ecosystems.

Genetic and ecological consequences of urbanisation in animals:

The evolution of social behaviour in animals:

Associate Professor Celine Frere's specialist areas of knowledge include building and exploiting long-term, individual-based genetic and behavioural empirical information to answer questions about evolutionary processes in nature (with a focus on social evolution and adaption). Associate Professor Frere leads the longest individual-based study of reptiles in Australia - city-dwelling eastern water dragons (8+ years), the largest dataset on koala distribution, disease and genetics in Australia, a large dataset on eastern red kangaroos (6yrs), and Celine is a genetic curator for one of the longest wild dolphin research studies in the world, the Shark Bay Research Project, (34+years).