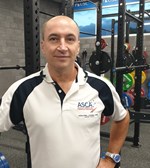 Mark completed his PhD at USC and has 30+ years of working in sport science and strength and conditioning at an international level in a variety of sports including Sprint Kayak, Tennis, Track and Field, Softball, Swimming and Netball.

Mark still uses skills he learnt as a Physical Education teacher in many of his current coaching roles.

Mark has worked with USC’s High Performance Program since its inception in 2011 and has more than two decades’ experience working with elite swimmers. As strength and conditioning coach, Mark is responsible for every aspect of the Spartans’ dryland physical regimen, including stretching, warm ups, tailored gym programs and injury and rehabilitation management.

Mark utilises USC’s cutting-edge technology to measure and maximise performance, such as complex heart rate monitors, saliva testing, and accelerometers (which measure the velocity of specific muscle movements). With each Spartans swimmer completing between three and five million shoulder rotations each year, the programs Mark creates also have a strong focus on preventing injuries caused by overuse or fatigue.

Mark began working for USC in 1998 as an Associate Lecturer, going on to complete a PhD in Sport and Exercise Science at the University. He then worked as a USC Postdoctoral Research Fellow, specialising in children’s’ physical literacy, movement and performance, before taking up his current role with the Spartans.

As a strength and conditioning coach, Mark has worked with international athletes in sports as varied as sprint kayaking, softball and tennis. His athletes have won more than 30 Olympic, Paralympic and World Championships medals. During the Olympics and Paralympics, Mark will communicate with the USC Spartans coaches on a daily basis, to ensure athletes are in peak physical condition for competition.