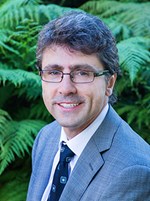 Professor Jim Lagopoulos is the director of USC's Thompson Institute. He has been involved with neuroimaging for more than 20 years in both the public and private sectors, and over this time he has attained significant expertise in magnetic resonance imaging (MRI) and has established and run programs across three research centres. Jim's research is focused on the translation of discoveries made using animal models into real-world treatment options for humans. In the past six years he has established an independent neuroimaging research program with a focus on traumatic brain injury and post traumatic stress disorder (PTSD).

Jim's research programs are focused on youth mental health, healthy brain ageing and dementia, PTSD, and traumatic brain injury. He has published more than 300 peer-reviewed articles in some of the highest-ranking international journals (eg Proceedings of the National Academy of Sciences, Alzheimer’s and Dementia and Progress in Neurobiology) and has an H-index of 50 (10,000 citations).

In 2012, Jim was appointed Editor-in-Chief of Frontiers in Science alongside his appointment of Editor of World Journal of Neuroscience.

Jim is an active teacher and contributes to both undergraduate and postgraduate education. His teaching experience includes lectures, demonstrations, tutorials as well as one-to-one teaching. He also has extensive experience in the supervision and training of students undertaking Honours projects, Masters theses, higher doctoral degrees as well as supervision and mentoring of post-doctoral and research fellows. At any one time, Jim maintains a diverse 'portfolio' of teaching activities that are stratified across his research themes.

In addition to the structured and detailed “hands-on” teaching and training, Jim also provides lectures and workshops to health professionals including GPs, psychiatrists, and allied health professionals who work with young adults with emerging mental health conditions.

Roy and Nola Thompson were named the Queensland Higher Education philanthropists of 2017 at the recent Queensland Community Foundation’s philanthropy awards in Brisbane.

The University of the Sunshine Coast Psychology Clinic, which has assessed and treated members of the public for almost 10 years at its Sippy Downs campus, is now open at USC’s Thompson Institute at Birtinya.