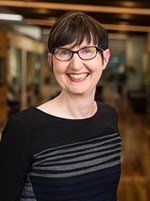 One of the longest-serving members of the University of the Sunshine Coast, Professor Joanne Scott is the Pro Vice-Chancellor (Engagement). She also chairs the Vice-Chancellor's Equity and Diversity Committee.

Joanne commenced with USC in 1997 as an Associate Lecturer in Australian Studies. Her roles have included the inaugural Head of School of Social Sciences (2006-2010), Chair of USC's Learning and Teaching Committee (2007-2012) and the Executive Dean of the Faculty of Arts, Business and Law (2012-2017)

Joanne has published in the fields of Australian and Queensland history, labour history, gender and race relations, oral history, popular culture and higher education. She is a former Visiting Professor of Australian Studies at the University of Tokyo. She was elected to the Engagement Australia Board in 2018 and in late 2019 became deputy editor of the organisation's journal, Transform. Joanne is the President of Education Sunshine Coast. She was previously a member of the Deans of Arts, Social Sciences and Humanities (DASSH) Board (2015-2017).